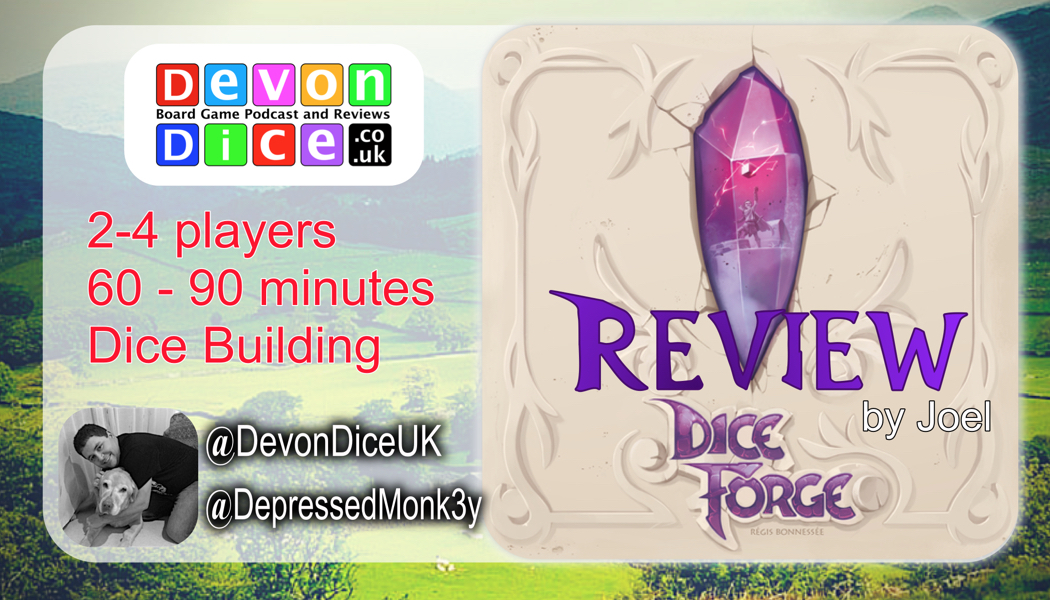 Pimp My Dice, Diejazzial, Lego Dice… just some of the name I was coming up with when writing this review.

Side note: I wrote many months ago and forgot to publish it, until now. my thoughts haven’t since I first wrote this but I have made a few changes to my own thoughts.

This isn’t a new thing as well, you could always stick stickers and on dice to change their faces and this is used by game designers all the time. Lego brought out board games using Lego technology, where you have to make the dice first before you could play the game but then giving you the option to change the faces between games to add a little bit of verity or Challange. 2014 saw the release of Rattle Bones a game where you change the dice faces as you play, but it was, in essence, a roll and move with some good points as well.

Dice Forge is a new game from the designer of Seasons and Lords of Xidit (Régis Bonnessée) but I can’t tell if it set in the same universe, as of yet. You have been set a task of impressing a load of bored gods, who have granted you a set of artefacts (dice) for you weld, which will aid you in gathering gold and other offerings. Gaining these will allow you to purchase better dice faces from the gods themselves or attempt heroic feats. This is all in aid of making a name for yourself and becoming a demigod and the only way of achieving this, is to score the more glory points than your opponents. 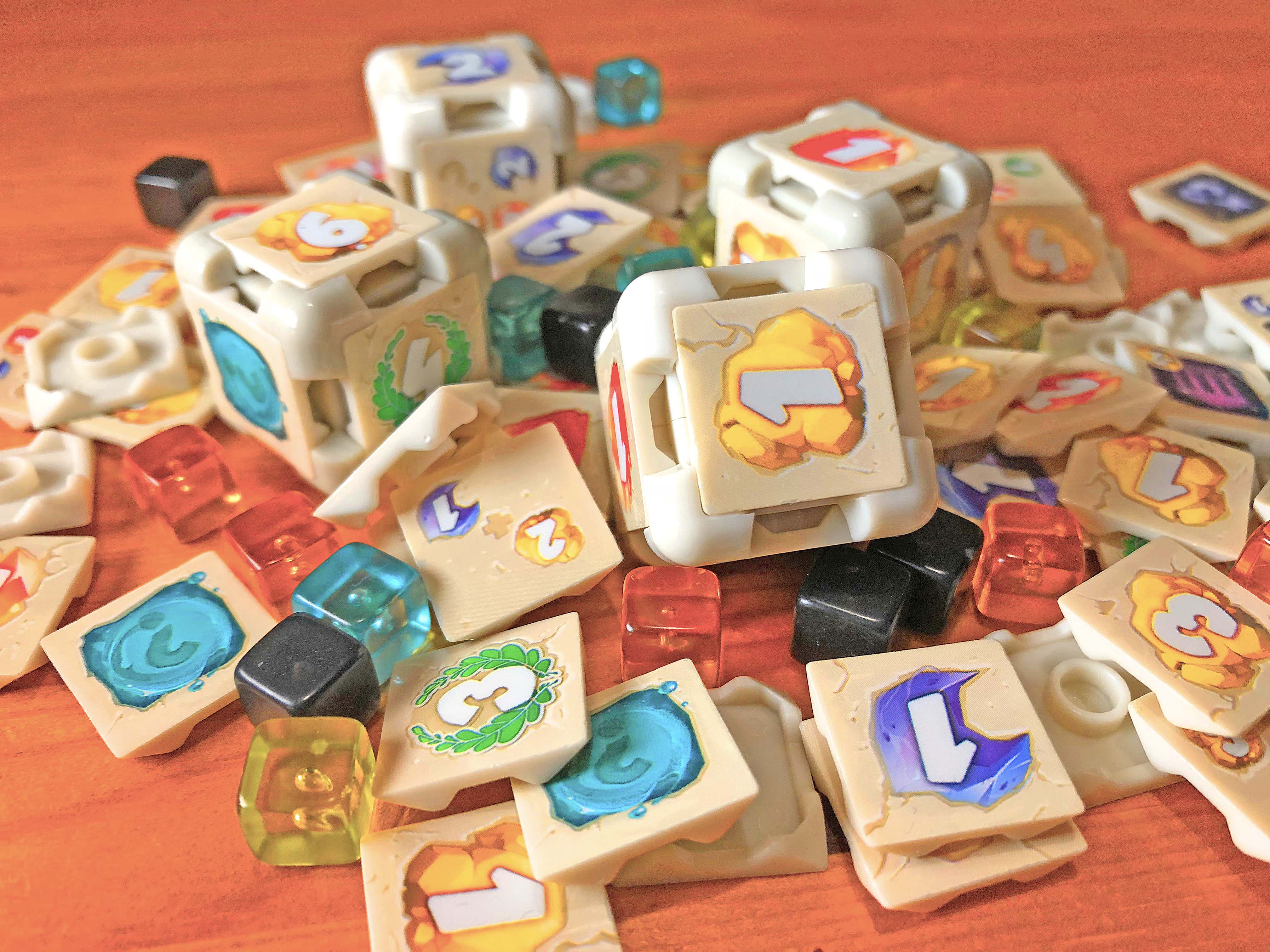 Let me get straight into the main element of this game, “the dice and the faces!” When you first get the game, all the faces come in a plastic bag and you have to spend a fair amount of time making up the starting dice and sorting the rest of the faces out into a tray that is provided, which a is an ingenious piece of design and heaven-sent. Because the thought of bagging this all up after a game and then to tip out it out on the table, only to sort through before every game would put me right off and I would be reaching for a different game. Said “die face tray” also has a paper sleeve to slip over to hold the faces in place while in storage. Which to my surprise works very well.

However, the dice do disappoint me a little, they are big, the size of season dice, but You will feel slightly let down when picking them up and the typical knee-jerk reaction is “Oh… they are lighter than I expected!” They look like, if you were to roll them and they hit a wall, the house would fall down, but in truth, an ant could carry these away. However, these seem to be made of the same stuff as Lego is and when you popping off an old face to fit a recently purchased one, it has that same satisfaction as well.

I watched the dice towers review of this game and the one main negative point they had about the game, they complained about not being able to remove the old dice off with ease, now if one of them had read the rules thoroughly, it says to use the new purchase dice face as a lever, which works so well, the first few times you do this and if kids are playing the old faces go flying around the room. But you get used to it catching them in middle flight from other players. An issue was highlighted in the comments of the same video, from concerned anal gamers, worried about damaging the face corners for using them as a handy removal tool. But I can assure you that I have played this many times and the kids have helped themselves and played on their own, and I am looking at the tray of die faces and I can’t see a single scratch, blemish, any signs of distress due to levering off other faces. As I said these feel like this was made in the lego factory. I believe the dice, faces and printing will survive: kids, heavy-handed gamers or anyone curious to know what kind of magic they used to print the face on and will attempt to try and peel away the corner of the sticker.

The other part of the game that will smack you in the face when you unbox this game is the insert. This is one of the best I come across. The way it is designed to hold everything and when you set up for a game the bottom of the box and the becomes part of the setup and the tray holding the dice faces you can buy is placed on top, creating a temple effect. which all adds to an eye-catching pull to passing spectators. This wonderful vacuum moulded organic polymers, also passes the shaken and upside down test, it holds everything in place I haven’t come across an insert that passes this test before apart from, Mech Vs Minions (it cheats by using tray covers to stop any minions from escaping their appointed positions).

Here another clever design trope, the die face tray is that it is narrower than the box, and when sitting on top of the insert, it reveals about an inch of the insert on both sides. Un-obstructing tokens that will be needed throughout a game. this is so handy because you don’t need to get everything out and most of the time the tokens that are finished with, mid-game, are put back where they were without prompting by the game owner. This also eases with breaking down time at the end of the game.

One thing you can not be disappointed about with Libellud (the Publishers) is artwork; they are known for, which has the most, unique artwork in any game, Seasons and Lord of Xidit is also no exception. And Libellid has pulled out all the stops again, giving this game an epic dose of strong visuals and you get the sense that there is a story behind every dice face, heroic feat card and every part of the game. there is a fold out board that sits next to the temple and the heroic feat cards slot into positions around this. simulating floating islands in the sky and each island holds 2 – 3 creatures and the cards art matches the island it is next to. If you were passing, not knowing the game, you would mistake this as one complete board.

If I was to nitpick about anything on the artwork, it would be it does look to be a bit washed out in places, making some symbols on the dice faces and the player mats difficult to see. Also, another thing that threw me a bit when playing the first few games; There are orange, blue, green and black player pieces but you get orange, blue, green and white player mats. Well the mat seems to be white but I do believe it meant to be a grey colour, but I found myself looking at the mat then looking for a white pawn out on the board, or visa versa.

The gameplay is unique, everyone rolls both of their dice at the beginning of each player’s turn and gains resources of what is on their dice. you record your gained resources by moving cubes up their designated tracks on your player’s mat, then the player who turn it is, can use any heroic feat abilities and afterwards proceed to buy more dice faces with gold or buy heroic feat cards with sun and moon shards. Most of the feat cards are one-off bonus, you buy them to do the action and turn it face down in front of you. Some have an action you can do on each of your turns and there a couple of timed feat cards. Most are clear to understand once you get your head around the icons but nearly every one of them has Victory points which you can add at the end of the game. The game come with a few extra cards which you can switch out some of the cards to change up the game more for more replayable.

Active AIn essence this is a deck builder but with dice and like with every deck building game, everyone starts with the same 2 dice and both mainly have 1 gold on each side apart from one die has a sun shard on it and the other has a moon shard and 2 VP. the first part of your game is to upgrade the dice you have. You won’t get very far by not doing this, but once you have customised your dice a bit, you can then focus on scoring victory points.

The feel and appear just like dominion did when that came out back in 2010. It’s new and fresh and been implemented well, in the future design will expand on this concept and develop better games using the dice forging more or like Dice forge took inspiration from Rattle Bones and remodelled into its own vision. I have this sinking feeling this won’t be around as long Dominion has been. Here’s a couple of thought to why: it is still a dice game and some gamers hate games with dice in. Just like Dominion the theme is just a setting, this could be any theme and it would still work. And the last thing is (and this is down to Libellud) not enough cards in the core box to aid replayable. unlike dominion and mainly other deck building games, you randomly select 10 decks to play that game with. Giving you endless options of card combos. Dice Forge has a starting set of cards, with optional 8 sets of cards to swap out some of the starting sets. This is not the endless combination of cards I expect from a deck/dice builder. However, it does feel like they might have held back something for an expansion. which needs to be released soonish or this could be forgotten about by many gamers.

I found all player counts work well but I feel the sweet stop is 3 players and I have been finding myself only sticking with the starter heroic feat cards with the exception of swapping out the big card that gives you a glory point for every dice face you have removed and placed on your player mat. 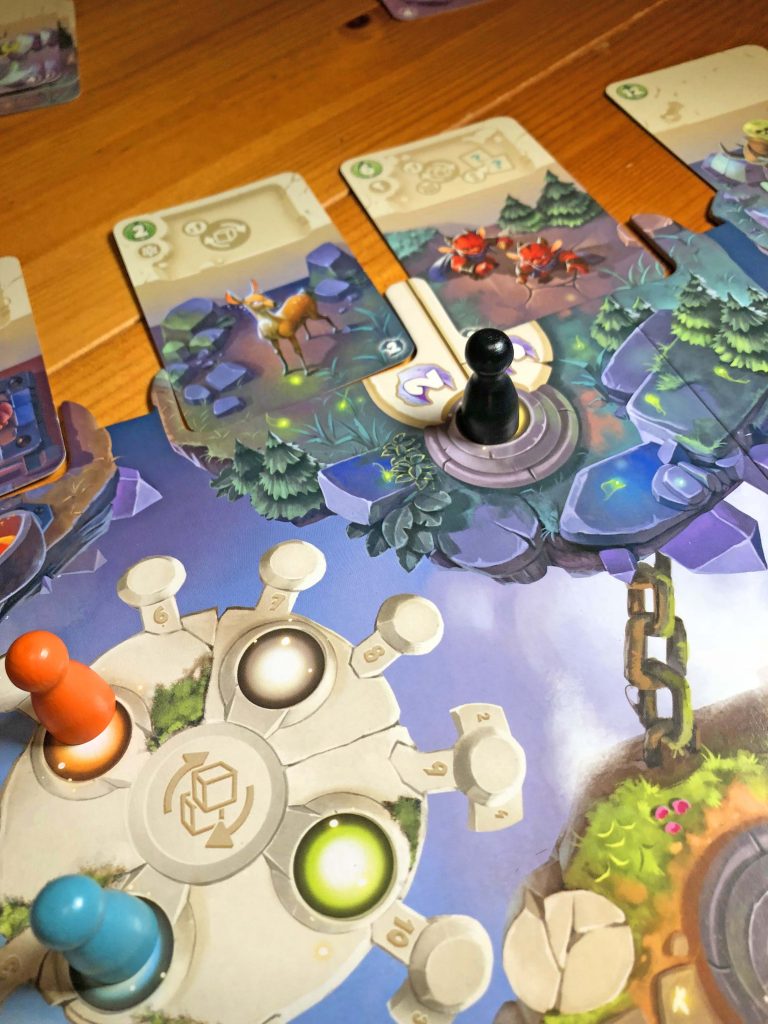 But in all, Dice Forge is bright, friendly, eye-catching and above all, it has Lego Dice in it. And it has a wonderful price tag of only £28.50 from meeple corner, for what you get it is a steal (but don’t steal it from Chris, it’ll upset him). At the minute I holding on to it because the kids like it as well the wife and most of my gaming group so its a win-win for Dice forge.

Now, can I be a Demigod?

Post side note: I still have this game I still play it with the kids every so offen.

Edited by Joel wright and Siri 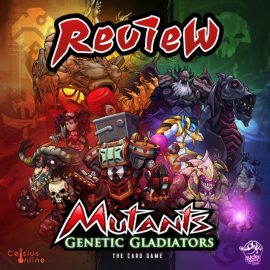