So, a few years ago I received a copy of Exit: The Game – The Pharaoh’s Tomb from Komos, we instantly played it and fell in love the whole concept of this game that used everything in the box and maybe even the box itself. You can read my review here.

Since completing that first game, I have made a point of picking up each one they bring out and have with the exception of the last 2 Exit games, and at this point in time I now only have one in my collection to muddle my way through.

I should really put together a top 10 list of these exit games. Something for the future.

However back to The Catacombs of Horror (TCoH) review, I was given a copy by Komos at the UKGE and I have only got around to playing it now because I wanted to save it for the right time and with the right people. Unfortunately, My loving wife has played a couple of games and not really enjoy them as much as I do. So, I have to wait for the right opportunity to arise. On a trip to visit my friends Sarah and Nick, and knowing they like a good EXIT game, this seemed like the perfect opportunity.

TCoH is different in some ways the others as it is a bigger box and is a 2 part story ( It says it right on the box), It also has a 4.5 out of 5 expert rating printed again on the box, this has to be the highest difficulty exit game. After completing this box I am wondering if this rating was a mistake and it should have been a 5.

This exit game is set in the Catacombs under the city of Paris. Which if you don’t know, is a labyrinth made up of mainly skeleton bones from humans remains, stretching back many centuries ago. It is so vast, they are sure that it has not been fully discovered and it holds many dark and mysterious secrets. However, your best mate Ben, though it would be a clever idea to go it alone and explore the maze of human remains to find out some of these secrets. On his Own…..

Somehow, there seems to be a very good postal service below the streets of Paris (they must be running on a skeleton staff) and he is able to send you a letter that he needs your help if you don’t hear from him in 3 days. 3 days do pass (not in real-time, thankfully) and so you pack a bag and fly off to find Ben. On your own too….

This is where your adventure into hell begins, No spoilers…

This version made me feel thick. Right from the beginning we were scratching our heads we were looking at all the information that we were given and it felt like it wasn’t enough and we were missing something. The feeling wasn’t helped by the fact that rules kept telling us to only start with 3 items and one should be a book. There was no book but there was a letter. I know in the past-exit games you always get a book which gives you clues throughout the journey, I don’t know if this is an oversight when copy and paste rules from one to the other but it wasn’t a great start, When you are trying figure out if the instructions are wrong, a piece is missing or it’s all part of the puzzle! This wasted some time.

Once we had mastered the first clue it became a little easier, from then on we sailing on the crest of a wave… no, we weren’t, we struggled again and pulled everything apart to find a clue or something. There was one item we never even thought about taking a look at, and it got us twice which was even more upsetting.

There is a point at which the game will tell you to stop the clock and note down how many minutes it took you and how many clues you used. This is the point where you can pack up the game and continue another day or… if you were us, say fuck it and carry on. This was mistake two, the mistake was us trying to solve a Mensa level Escape room after playing 2 medium- heavy Euros.

So, we continued, on the quest to find our so-called friend who thinks he is helping by leaving cryptic clues that only Bletchley park workers could break. On the way through this last section, I developed a headache and that was the end of my ability to think, and I could only hope that we were near the end. At that point, I couldn’t have cared less if we rescued Ben or if the stupid fool had joined the rest of the skeleton postal staff.

Did we save Ben? Well, that would spoil the game and you will have to find out for your self.

You might read this review and think this is not a good game because it sounds like I had a shit time with it. And I did. This isn’t my favourite of the series, hell, it might bottom of the pile. However, there are many contributing factors to this experience: I was a week deprived of caffeine and fizzy drinks, we had already played 2 mid-heavy games and we were trying to complete the last section late at night when we should’ve given it a rest. The reason we decided to push on was that we could see it being a while before we were able to get back to it. At the end of the day, we did not enjoy our play of it, and for a big box, there wasn’t as much inside as I was expecting. Also, there was no real standout clue or puzzle that made us go “oh wow!” it was all a bit bland and frustrating, some of them we could see what to do quite quickly but they were clearly set-up as time burner puzzles and took ages to grind through. Plus after the game, we were left guessing whether we should have been using items or not. At points, it was a case of pushing the fuck it button and just use what we can and see what happens.

Most of the stories in previous games made sense, this was just bizarre. How did Ben post his letter within the maze of bones? If he knows he was in trouble and left this hell hole to post the letter, then why didn’t he just go home? and why the fuck were the clues he left us so stupidly Cryptic? If he had taken the IQ down a notch or 2 they might have been easier to guess. There was one point the game seemed to be mocking us for being stupid and slow, that was the icing on the cake for me I could have flipped the table there and then.

This has not put me off the series I still want to play one I still have on my shelf, plus there are more out there I want to play. I love this series of escape room games but this was at a level beyond me and if you are planning to play this ask one of your really smart friends to came and play and also make an evening of it, I’m happy to tick it off the list and it feels good to vent my bad experience of it, but hey they can’t be all good.

Game donated for review perpesises by Thames and Kosmos

Exit: The Game – The Catacombs of Horror Review (No Spoilers)
Please Share this with your friends 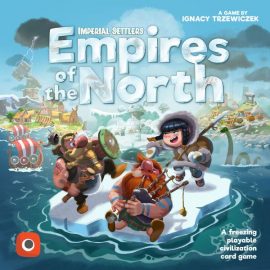 Unboxing Empires of the North by Joel

70. DDP without a Script but with a Lewis, Rugusa, Clank In Space, Tapestry

Started my first game of #clanklegacy on Sunday, f