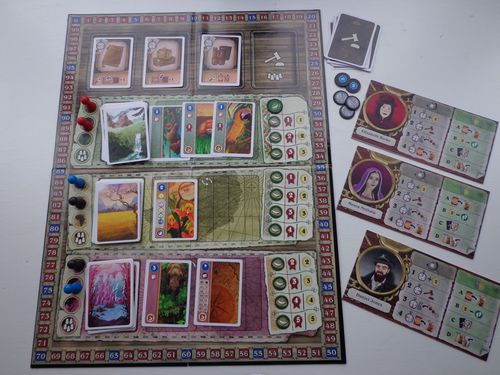 Devon Dice had the chance to spend time with a prototype of Exploriana from UK based designer Miles Ratcliffe. I have to admit that the prospect of reviewing prototypes doesn’t fill me with enthusiasm. Most of the time you’re left feeling obligated to come up with faint praise for half-baked ideas and uninspired game play. Happily, this was not one of those times…

Exploriana is a card driven press-your-luck game for 2 – 5 players with a snappy playing time of 30-45 minutes. Set in the 19th Century Age of Exploration, players send expeditions to mysterious lands in hopes of bringing back specimens of exotic wildlife and discovering ancient treasures.

Overview. Each round begins with an auction for several asset cards, either tools to help on the journey or things that influence scoring. Players then take turns placing their two explorer pawns on one of the three continents: South America, Africa, or The Far East. Each continent has a deck, each card representing a discovery: rare orchids, animals, artefacts, locations, maps. The rewards on each card come in several currencies (victory points, coins, renown). Some cards also have a hazard (wrong turn, animal attack, rockfall). In order from top to bottom, each pawn explores by drawing cards one at a time, as many as you like up to a maximum of 5. Stopping before 5 allows the choice of one card as a reward, but drawing up to 5 allows two rewards. However, as soon as 3 of the same or 3 different hazards appear, the expedition is lost and you get nothing.

The Auction is the critical prelude to every round. The assets are useful and potentially pivotal to end-game scoring strategies but the number auctioned is fewer than the number of players, meaning not everyone has a chance at getting one. Some cards are tools that help during the expedition, allowing you to mitigate hazards or preview upcoming discovery cards. Others give special scoring bonuses such as victory points based on the number of animals collected. Each asset has a unique ability that can complement some strategies more than others.

Exploration is the heart of the game. It’s pure press-your-luck. Drawing up to 5 cards reaps the big reward, but as the hazards come out it becomes a nail biting decision whether to continue and risk losing all or slink away with a safe but smaller reward. One card…after…another… All the while, the other players are goading you on and chanting “One more card! One more card!”

The discoveries have different characteristics and it’s not a straightforward decision which one to take. Some (maps, orchids) reach full scoring potential when collected in sets. Deciding whether to emphasize gaining victory points, renown, or coins is hard because the game does a good job of making these currencies distinct. VPs are only beneficial at the end. Renown can earn VPs based on having a majority, but more importantly it determines turn order in the auction and expedition phases. Going early allows you to dictate the direction of the auction or nab the most lucrative exploration spots. However, lack of coins has dire consequences for both the auction and exploration (coins let you to hire a guide to mitigate the effect of hazards).

There are press-your-luck games I consider absolute classics. On the simple end are Incan Gold / Diamante and Can’t Stop! where the press-your-luck mechanism is all there is apart from strategising about statistical odds and the behaviour of other players. On the more involved end is Knizia’s masterpiece Ra, a hybrid of auction and press-your-luck with some complex set collection. I’ve played many other press-your-luck games and even the good ones leave me unmoved because the aforementioned games scratch the same itch but do it better. Exploriana falls nicely between the two ends in a complexity space of its own. It’s a quick, simple game with meaningful decisions related to asset/currency management and VP scoring goals.

Exploriana has an admirable leanness of design. Nothing feels fiddly, unnecessary, or tacked on. The currencies tied to discoveries (VPs, renown, coins) really do have distinct purposes. Grabbing high VP cards early is tempting but they won’t give you the resources to support your exploration. Collecting renown gives you initiative (and a potential end-game pay-off) but you need coins to purchase assets and guides. Even the decision of whether to blow your coins during the auction or hold them back for the expedition is often a hard one, and the pursuit of lucrative VP-generating discoveries can easily leave you broke at auction time, letting other players run off with incredible bargains.

Press-your-luck games are inherently social games where everyone gets involved in the tension and excitement of the moment. Half the fun comes from the crowd shouting encouragement or trying to goad a person into taking stupid risks (“go on, mate, keep going, you’re nearly there, what could go wrong??”). We’ve played Exploriana 2-player and it works, but the more the merrier. A player count of 3 – 5 is the sweet spot. The interaction of the auction also benefits from more players. Exploriana does not overstay its welcome. At 30-45 minutes, it’s often over before you know it. The game length is variable and ends when one of the decks becomes depleted, typically the auction deck which limits the game to 4 – 6 rounds depending on player count.

If there’s one aspect of the design that feels unpolished, it’s the final round when the continent decks are depleted and some may run out during exploration. There’s nothing wrong with this per se, and you could argue that it’s actually an interesting variable to account for tactically. But it can feel anti-climactic to resolve expeditions where there really aren’t many choices due to lack of card availability. This is a minor quibble and happens only sometimes at the end of a game, but I wonder if there could have been a more elegant solution.

Finally, let’s be clear: press-your-luck games have a good dose of luck (it’s right there in the name of the mechanism!). Luck of the draw is a central part of the experience during exploration, although the use of guides and items can mitigate this to some degree. If you’re allergic to luck, look elsewhere. For everybody else: Exploriana surrounds the whims of fate with real (but not brain-burning) decisions.

We’ve introduced Exploriana to a number of groups and it’s been met with resounding enthusiasm. It’s a light hearted, socially engaging game that still requires some thought. Hardcore gamers will consider it an entertaining filler. I mentioned Knizia’s Ra earlier. While most think of that as a lighter game, the set collection and scoring rules are enough to befuddle a non-gamer. Aside from some iconography (the game is language independent), Exploriana is a more accessible game that I would much rather introduce to casual gamers or family as a step beyond very simple games like Incan Gold

Notes: The publisher provided Devon Dice with an unsolicited copy of the Exploriana prototype. All pictures show the prototype. Presumably this is most of the final art, which is colourful and very nice indeed.

Exploriana Review By Micheal Verde
Please Share this with your friends

The Ever growing Games to pick up From Essen 2017

Exit: The Game – The Catacombs of Horror Review (No Spoilers)