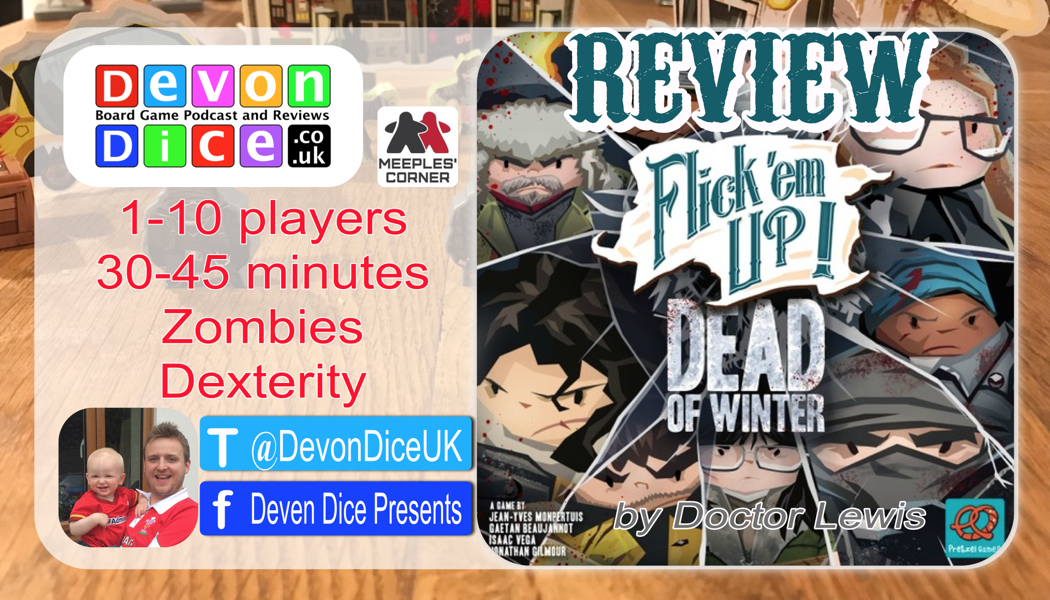 Flick ‘em Up Dead of Winter (FeUDOW) is the latest release from Pretzel Games, the company behind Flick ‘em Up, the popular dexterity game set in the “wild west.” This latest iteration takes the mechanics from the original and re-themes it into a world of post apocalyptic  zombie nightmares and, most importantly, adds the ability to play entirely Co-operatively.

Set in the “Dead of Winter” (the original crossroads title from Plaid Hat Games) world, Flick ‘em Up DOW puts the players in the position of survivors battling against hordes of zombies with nothing but pistols, shotguns, sniper rifles, throwing knives and baseball bats to protect themselves… 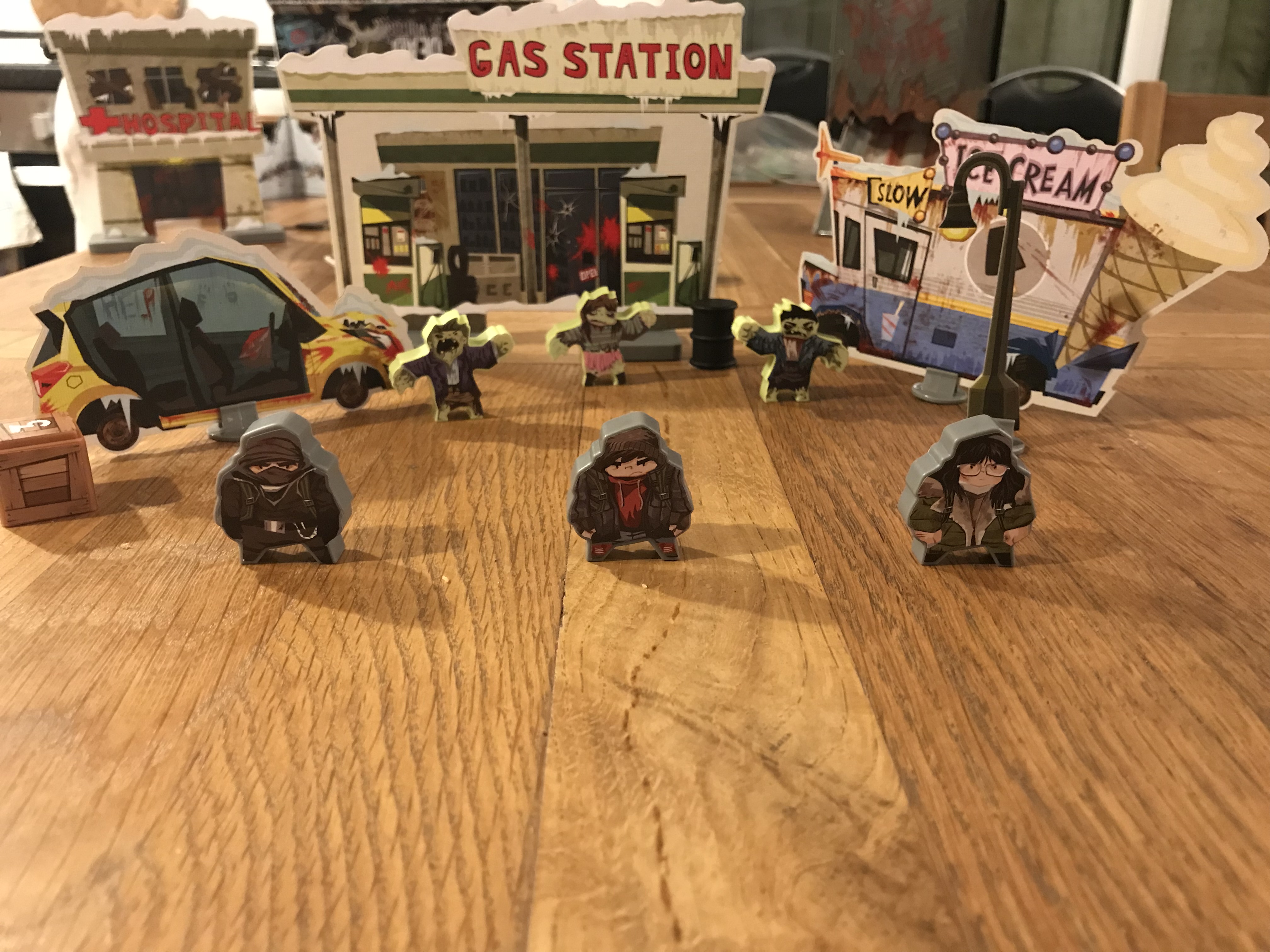 Thankfully the art is updated in this version of DOW making it considerably more cartoonish allowing a more family friendly feel to the game. The components also are of sufficient quality to keep critics at bay. Pretzel Games appear to have switched from their traditional wooden pieces instead using plastic, as seen in the most recent version of Flick ‘em UP. Although at first this sounds concerning and I was initially skeptical, it must be said the characters and zombies and suitably weighty and detailed. The actual flicking pieces are plastic also, but a composite resin plastic (which reminds me of Bakelite; if anyone is old enough to remember Bakelite…) this gives significant extra weight and durability to the pieces. In fact I must admit that despite my skepticism I have not missed wood in this game at all.

The scenery however still holds much room for improvement. The buildings comprise large cardboard standees with plastic stands, there is not enough space in the box so each building requires assembly/disassembly at the beginning and end of each game which adds significant admin time every time you get it out to play. There are also a selection of cardboard vehicles to add to your city scape, again the art is attractive, thematic and fun, but for some reason they only included one very small plastic stand for each of these, resulting in the vehicles flopping over at the slightest knock  (or sometimes no knock at all.) This can be very frustrating if it causes other pieces to scatter across the table and you are forced to stand it back up and work out where each piece should be.

In terms of gameplay this game shines as one of the best designed entirely co-operative flicking dexterity games I’ve played. Each player takes turns to perform 2 actions with a survivor (moving, shooting, collecting supplies etc…) then the zombies react. The design is clever in that if you make a “loud” noise such as shooting a gun etc the reaction from the zombies will be significantly greater than if you are sneaking round the back to dart into the garage to collect some fuel. The zombie reaction comes in the form of a “zombie rush” towards your character, this involves using the “zombie tower” essentially a dice tower for the zombie miniatures. You place the tower behind the zombie then place that zombie (plus 2 more if you made a loud noise during your turn) on the platform at the top of the tower. Then you let the platform drop and the zombies come charging towards your defenseless survivor: if the zombies knock the survivor over then a life is lost. There is a good amount of strategy that goes into planning your move, thanks to the rules of the tower placement. The tower is placed behind the nearest standing zombie, this means knocked over zombies are temporarily out of play, and you can use this to your advantage. In addition provided you only make a quiet noise on your turn, if the nearest zombie is lying down all that happens is you stand that zombie up, avoiding the “zombie rush” entirely. This all creates great suspense and is incredibly thematic. Do you try to creep around that group of zombies to get to the supermarket, hoping you can finish your move in just the right place so that you end up closest to that zombie lying down? Or do you just open fire with your twin pistols and hope you don’t miss because all that noise is going to trigger an epic terrifying encounter as the nearby zombies charge you? 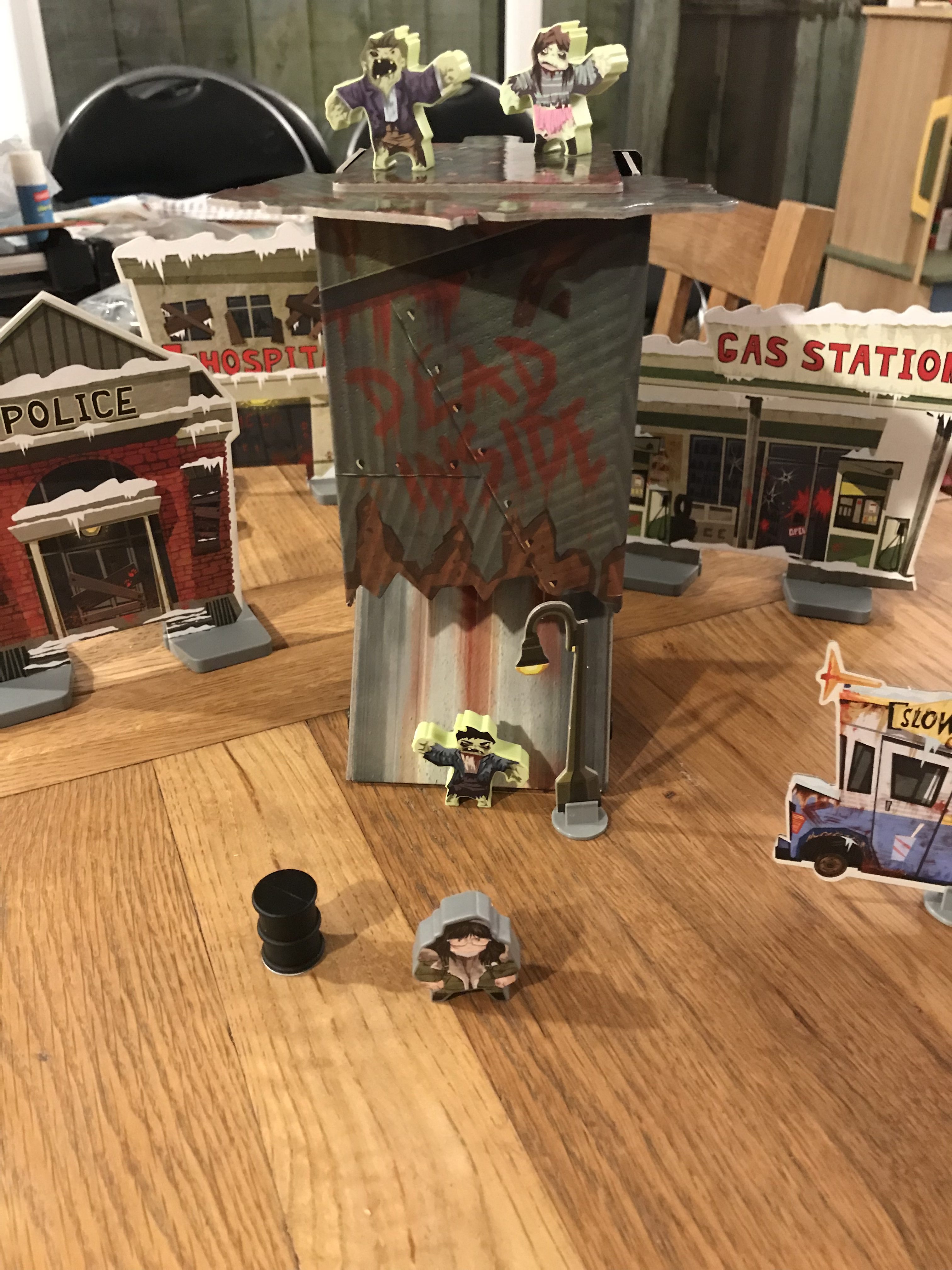 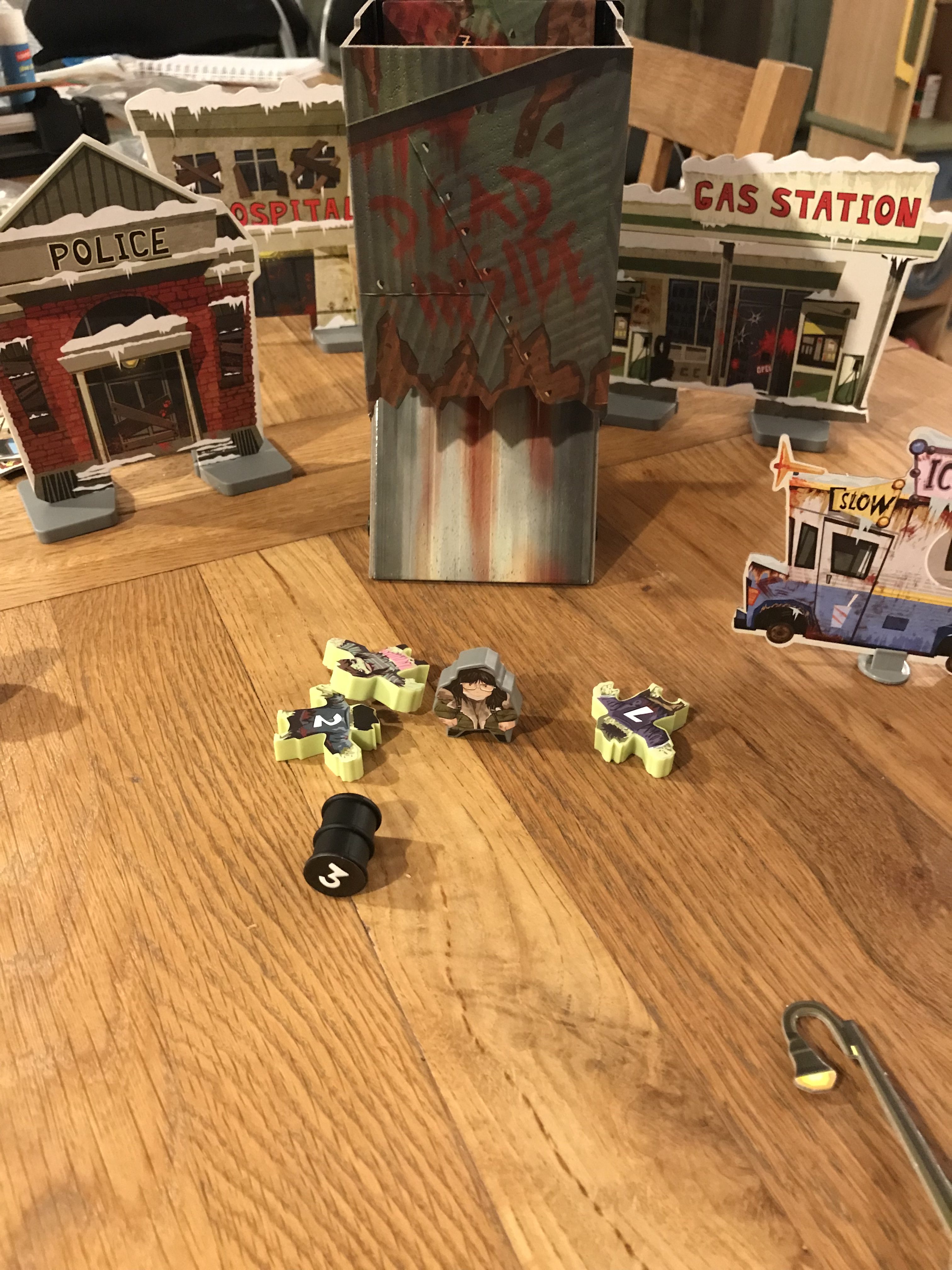 There is also exceptional variability is gameplay; there are five different weapons each having their own unique attributes requiring different styles. A pistol, which involves just flicking a black disc at the zombies and hoping you knock them over. Then there is a sniper rifle which uses the same black disc as the pistol but fits snugly into a cardboard guide to help improve aim for long-range shots (and works very well!) There is also a shotgun which uses multiple tiny discs which are harder to knock over zombies with but fire off a spray of them potentially allowing multiple close range zombie kills with one shot! The throwing knife is my personal favorite as it allows silent kills, however it’s unbalanced shape makes accuracy an acquired skill! Finally the baseball bat is the weapon of choice for the advanced tactician, not only does it let you move as you use it but the zombies who are knocked over are not killed, which allow you and your friends more options for silent moving and avoiding the deadly “zombie rush.” 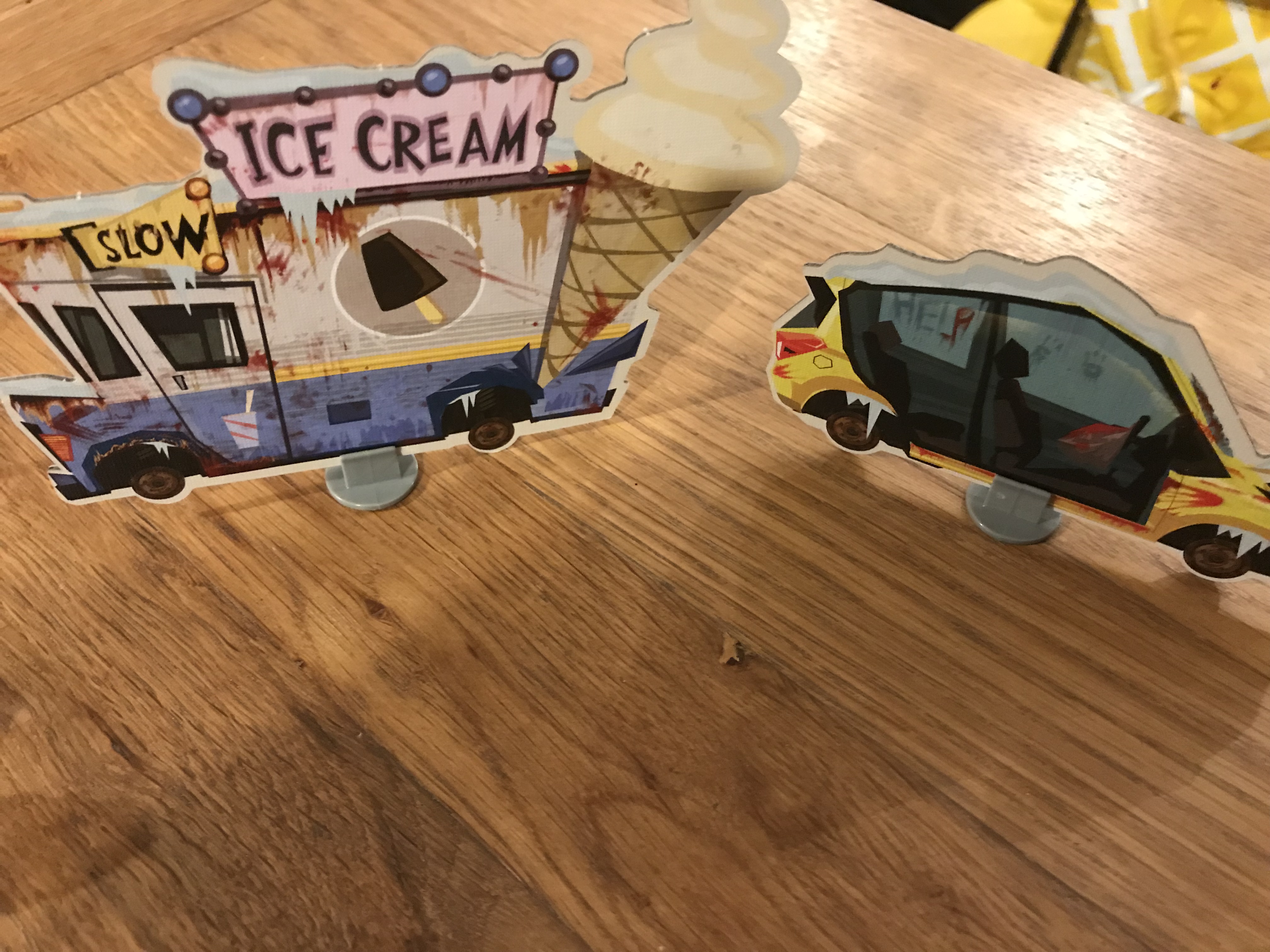 There are also ten scenarios in the book allowing multiple challenges, both in fully co-operative mode and team based warfare; there is even the option to include a traitor mechanic on each team. My personal feeling is this game shines in full co-op, but by the time you are playing in team vs team mode with traitors the game gets bogged down in it’s own mechanics.

The other big issue with the scenarios is the losing mechanic. Basically each scenario gives you a limited number of turns in which to complete it, this is the main way of losing. This can result in some scenarios being very pressed for time, and a couple of early missed flicks and you know you will be unable to complete the scenario in time. The losing criteria really could have been better thought out and is a massive negative to an otherwise well thought through co-op game.

Overall this is a fun, thematic game and the stories that will come out of it with your family and friends will be funny and memorable. I can still recall our first game where Loretta walked out into the middle of town and started shooting zombies. Wave after wave of zombies charged at her each turn, sometimes zombies glanced off her, sometimes sending her spinning across the street, but never knocking her over. She skillfully picked them off with her single pistol again and again leaving a mound of (un)dead around her. To this day when we play we know if we have “bad ass” Loretta on the team things will turn out fine!

However this game suffers from needless mounds of faff! Setting the game up is a needless time intensive faff, every time you want to move you have to remove you figure, replace it with a disk, flick the disk, then replace the figure where your disk went. (Which reminds me… if you mess up a move by hitting any other object the move is just cancelled, this takes so much away from the beauty of flicking games! The great thing about flicking games is you can get things wrong but you have to work with it, maybe your move was poor so now you have a long range shot through some barrels to make… you still have a chance to pull off that miracle shot. However with FeUDOW that is denied to you as your move is just deleted, ignored, lose an action, have another go… and this is significantly less fun!) The buildings are too tall, always getting in the way of your shot, but not in a fun challenging way just in an annoying, frustrating, constantly getting knocked over by a trailing hand way. The vehicles keep falling over due to their tiny stands, which is another faff! Every “Zombie rush” requires you to maneuver bits out the way to place the tower (again knocking over the darned vehicles!!) in fairness I could ignore the faff of the tower as it is such a good addition, but combined with all these other elements it’s all just too much!

Please do not get me started on the rulebook! ambiguous is being generous!

So while Flick ‘em Up Dead of Winter contains some really great innovative elements, and can create some magical gameplay moments, unless you absolutely need and love another zombie survival game in your life, I can’t recommend it. The admin and faff is too much and too frequent throughout the game to make it worth it. If you are really looking for a flicking dexterity game then I’d wait for the re-print of Catacombs by Elzra Games which is coming shortly and in time for Christmas. (There are even some zombies in it if that’s what floats your boat!)

Flick ‘em Up: Dead of Winter Review by Doctor Lewis Jones
Please Share this with your friends

Ghosts of Christmas Games Past 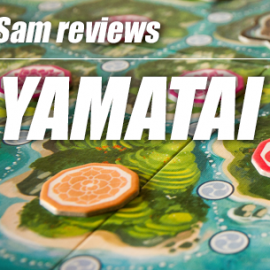