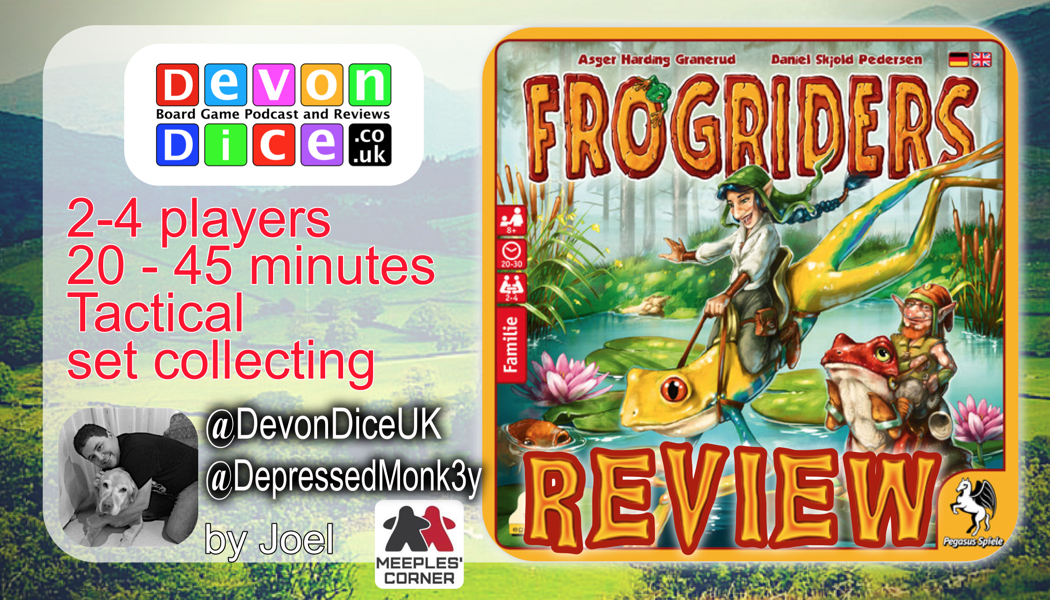 There is an old saying: Don’t judge a book by its cover!

Well, in the case of this game it’s true as well as the name. When Christoph (Meeples’ Corner) gave me the game “Frogriders”, and yes that is its name, I looked at the cover art and read the name and said through gritted teeth, “thanks,.. I will find the time to play it…” when I got home, I placed it in the pile of shame (games not played, yet) where I hoped it would get lost in the void, like the rest.

I would like to apologise to the artist Alexander Jung, because it will feel like I’m knocking his hard work. Maybe it’s the style he used, because it looks like he has done some other good work before, i.e. Animals on Board and Beastie Bar and those covers look great. I believe in my heart Frogriders reminds me of my childhood and takes me on a bad nostalgic trip, back to when I was read or had to read old classic bedtime stories with similar art and vibe. It was quite unsettling looking back, I also found some of those stories just boring. But the cover doesn’t help sell the game in my opinion (sorry Alexander). Frogriders sat on the game table that the Meeples’ Corner game’s day without anyone picking it up to look at, until Christoph handed it to me.

Now, Isaac (my son) sees any new new game in my collection and instantly wants to play it (a real gamer here), and a lot of the time I have to let him down.  He saw this sat in the collection and asked if we could play it, so with a reluctant sigh I broke the seal and read the rules, which didn’t take long, I then went on to teach the kids how to play. Thinking it wouldn’t be long before they would soon lose interest and want to go back to normal day care, Nanny TV and Auntie iPad, after a couple of turns.

This is why; it has a chess-board lookalike feature, which is themed to look like a pond covered in lily pads and then you cover it with plastic coloured frogs, with riders on them, placed on every square but one. There are a few placeholders for cards and an area called the village which at first you think is just decoration but it is part of the game.

These are the rules:

On your turn, you pick a frog and jump over another frog, Free Willy Style, landing on an empty lily pad on the other side, collecting the frog you jumped over and placing into your possession. I know they are really complexed rules so far, but wait there is more… You can then, as an optional rule, place a frog from your collection into the village area and do the action of that coloured frog. Way too complex now, I know, I will slow down a bit.

So in layman’s terms, this game uses the best bit of draughts (“Checkers” for you Americans and Michael’s benefit) and gives the pieces special abilities. Yah! This is so cool, with the simple rules and adding powers the pieces makes for a fun tactical game and gives you plenty to think about on your turn.

Let us start at the beginning; so there are 4 colours of Frogriders but you as a player don’t own any of these colours, You are given a secret objective card which depicts a set of colour/s Frogriders you want to collect to earn points. There are also a couple of communal goal cards on the board. This gives you an aim in the game, to collect different colours of frogs to gain most points at the end of the game. But with these frogs comes great power (without the responsibility), you are given a choice; to keep the frogs in your possession or place them in the village to gain their abilities. “What is so great about them?” Well red frogs allows you to make another jump (big deal, I know but it will become very clear soon), Yellow allows you to take another frog out of the village and blues allow you to take one of 4 pillage cards, laid out in a row. And these are so good, they can help change your game plan and tactics. Like letting you jump diagonally with the frog you choose, not just orthogonally. You might be able to jump in an L shape, do a run-up jump or you can take the frog you jumped with. They might give you an extra goal to meet or a different way to score some extra points. Plus most of them will give you extra victory points on top just for kicks. Oh, and the brown frogs don’t go in the village, they just sit there on the board feeling unloved until the end of the game nears, you will get a victory point per brown frog in your collection.

So the game makes you work towards collecting a type of colour frogs and 2 players could have the same card or similar goals and you might find yourself fighting over the same colour frogs, which makes it more fun. And while the kids are not at the cutthroat stage yet, they really enjoyed playing the game. Where I haven’t shown them how to play draughts yet, I believe with this game I don’t need to now. While Isaac is only 5 coming to 6 soon, he did struggle a bit with the set collecting bit and privilege cards rules, but he loved it and wanted to play a second time and again the next day and the day after, plus he was able to rope mum into playing a game. She wasn’t a fan of it (the only one so far).  Caitlin got the game on her second play-through and started to show her gamer colours by make advanced moves to improve her scores and make me a proud gamer dad.

For instance, she was after a particular colour frog but wasn’t able to get it, as there weren’t many left on the board. So she surprised me with a move that I didn’t see at first. She jumped with a frog she wanted, putting it in a position where she could take it on her next turn. She then placed a red frog in the village and was able to make another jump over the frog she wanted and place it into her collection and it put a massive smile on my face, seeing my daughter mature into a true gamer.

Reds are also good for collecting more points because there are cards in the privileged deck that if you land on a lily flower, which are scattered all over the board, you collect a point, and if you can keep jumping on a flower you will be racking up the points over the course of the game. The yellow frogs are good to get the colour frogs out of the village you need to score with or harness the power of that fro
g again. You do find there is a big bun rush for the blue frogs which is not surprising, as the privilege cards are a real benefit for you and help you out so much. The poor brown frogs are always left to the end as no one sees the point in them (they are worth a point) until they see the game drawing to an end and is another rush to grab points.

The game ends when there are no possible moves left which could end with ten frogs left or none maybe, there have always been a few left in my games. In which case the game doesn’t last that long, 20 to 40 minutes, if you really think about your turns then you’re looking at 60 minutes,mso it is a quick game, maybe too short for some. However, I don’t mind at all, as it keeps the kids entertained and wanting to play another game. Two thumbs up in my book I say. Everyone, apart from the wife, has enjoyed their plays, but it is difficult at first to get any interest to play the game because of the box cover art and the name. I do have to use the words, “ignore the art and the name and trust me when I say it’s a good game.”

And sure enough, when I do teach the game, which takes no time at all, the first thing most say is “oh, it’s like draughts.”

I am really glad I have given Frogriders a chance, it’s another great game from the designer of Flamme Rouge, Asger Harding Granerud. A really fun tactical family game with a nice theme to fit the mechanics and it has given me some real gaming highlights, definitely a stayer in my collection.

You should not judge the cover or the name, give a go next time you see it on a gaming table somewhere. Or you could pick up a copy from Meeples’ Corner for £27.50

Frogriders Review – By Joel, No Frogs Were Kissed In The Making Of This Review
Please Share this with your friends 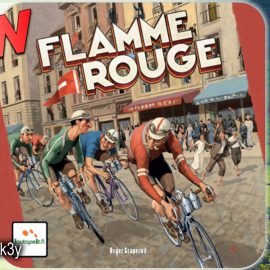