This is a little different article which replaces the “On The Horizon”  monthly post.

It is the season of the Meeple,

The special time of Cardboard,

all the ways of rules not made Clear.

But something has been bothering the guys at Devon Dice, they are being haunted by gaming ghosts of the past, present and future.

In this post the DD guys are being asked to reflect on board games that haunt their past: this could be a game they have never owned, played or experience that changed them and they need to experience it again.

Choose a grail game or one you have always wanted but never got or played, a game that has to be completed or one that you use to play as a child) over 2 years old.

Game: Bread: The Board Game

Why: This is another game of my childhood and ironically an actual Christmas present. Back in the 80s, Bread was one of the most popular sitcoms going, following a dysfunctional Liverpudlian family, all in orbit around the matriarch of the family, Mrs Boswell.

The board game is a simple roll and move of the Monopoly-style. Players have to collect a full set of the various elements that make up an independent lifestyle, in order to break free of the clutches of mother Boswell. You need to find a job, a car, accommodation, a girlfriend and… a phone, weirdly. Remember, this is the days WAAAAAY before mobile telephony!

I have fond memories of playing this game with my sister over and over again. Digging out my old copy, I took it along to Tuesday night games one week and let’s just say it was ‘memorable’! The thing too about 3 hours to play and even at that point we chose to give up rather than continue! Truly a Ghost of Christmas Past for me.

Why: This is a game I started playing with friends and got halfway through before the group got a little burnt out on it, so it was decided that we would take a little break and that little break turn into a year, then 2 years, and before I know it, the group has disbanded. This is a game I would like very much to finish and I would have loved to have done it with the same people I started the adventure with, but it so unlikely now as one lives in New Zealand and another fell off the face of the earth and Plus Micheal who found it not to his liking. Old Lewis has now given me an ultimatum to complete in the next year or he will spoil it for me. It is a game I very much will complete in one way or the other. There is so much I have heard about in the later stages to the campaign, that I must witness it for myself. So, you could class this as a New Year Board Game resolution.

Update, Lewis has promised me that he help me fulfil this task when he gets back from Zealand.

Why: As a kid, probably about 10 years old, I remember going to a friends house and finding a copy of Escape from Colditz. We opened it, set it up but didn’t have the first idea how to play it.
At that age, I had a childish understanding of the concept of prisoners of war, through films like The Great Escape and Escape to Victory. So to me, the board was an exciting playmat. We ignored all the rules and used it to play our own games and tell our own stories.
I’ve never played the game correctly since, something which haunts me to this day.

Why: A little over two years ago, three of the Devon Dice lads were wandering the halls of Essen Spiel looking for something to strike our fancy when we came upon an empty table at the HABA booth. HABA makes kids games but they also have the occasional sophisticated offerings for families so we thought we’d try our luck. No luck: nothing was free other than this dumb dexterity game sitting on the table, Boom Bang Gold, that looked like it was for 5-year-olds. You all throw sticks of dynamite into a box and, as quick as you can, nab all of the bits of gold and loot that you can grab with one hand. It turns out that for grown men playing to win and not afraid to shed some blood, this game is a barrel of laughs. We all took home a copy, me thinking that one day if I’m lucky, knock on wood, it would be a laugh to play with the son. Now he’ll be turning five in a few weeks and it’s his favourite game. Thanks, the ghost of Essen Christmas past!

Game: Holding On: the troubled life of Billy Kerr

Why: I first played this game as a demo at the UK Games Expo in 2018. Joel and I had been matched up by luck with the delightful Fiona of “The Game Shelf” fame and her friend. It’s a simple worker allocation game where victory is achieved by unveiling “memories” of Billy Kerr, which come in the form of pictures and string together to form a narrative revealing insight into Billy’s life. We only played one game but it seemed original, brilliant, fascinating and so much fun. I raved about the game and couldn’t wait to get my hands on a copy. Since buying it I’ve not been able to muster any enthusiasm for it despite trying to start the campaign about 5 times now. That one play of it back at the UKGE haunts me… I suspect it was that rare thing of having the perfect people over a game that brings a certain magic… I think there was something about the coming together of those four personalities that just clicked: I suspect we could have been playing Monopoly and still had a blast. It really highlights that who you play games with is as important as what games you play. I play with people who enjoy a laugh and we have a blast sledging each other and cheering/commiserating each other’s successes and failures: Which is in great contrast to the library like conditions some people need to play games. I think if I didn’t play games with the people I do, I would not enjoy them half as much! (who would have thought I’d get so soppy at Christmas!! I must be getting homesick.)

Price: £30 (although seems to be going for £15 currently on amazon)

Thank you for reading this article, stay tuned for the next one which should out on the 20th December 2019. Ghosts of Board Games Presents…

Ghosts of Christmas Games Past
Please Share this with your friends 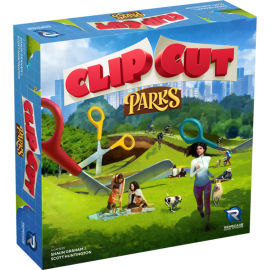 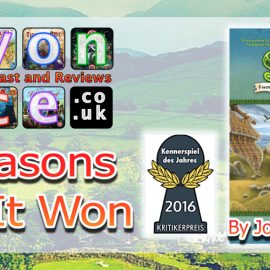 Isle of Skye… A Kenner-Spiel winner?

Down Force Review by Joel Wright