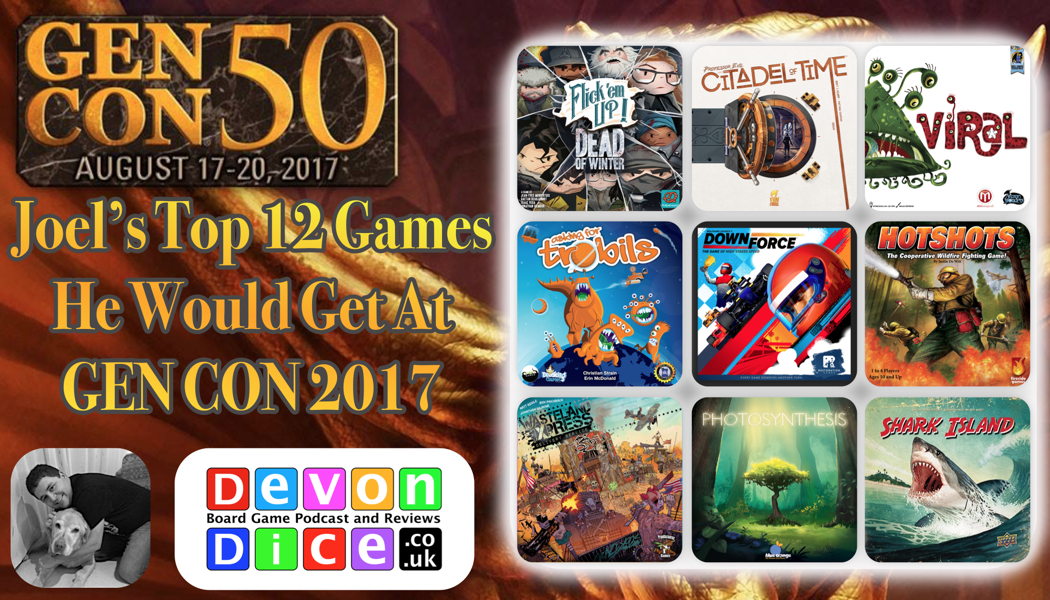 Gen Con 50 is just around the corner and it is one of those conventions, as gamer you should go to once in your life. As I live the UK, I am one of many that have to view it from afar and watch all the great coverage on Youtube, so I can live out my dream of being there in the mass of sweaty bodies and trying to soak in every trading stand and demo table possible. I do know, however, I have Essen to look forward to in a few months and I am very excited about that. This is a dream list and is only games that I could buy and not including expansions at the show. So starting with number 12 being my less bothered about game to my number one game that I will kill all, who get in my way and block my route to the publisher’s stand, to purchase said game.

Now, I know it is a Co-op and I don’t really do co-ops but I do believe this could different and could break that stigma. I like the sound of its push your luck dice rolling manic, to see if you roll the right faces to put out the flames or fail trying and the fire will spread through out the forest. I could see this working well with the kids, it looks simple to and they get to roll lots of dice. Job done!

Another Co-op! What am I thinking… well, from what I have read and seen of this game, it takes the works of Lovecraft and turns the actual gamers into madmen and women. Taking that kind of party trick, the wacky and zany, and putting it into a board game. I love the idea you are all trying to work together and to beat the game, but imagine: Lewis is in the corner of the room shouting at us, Tom has said he has an idea but is now not saying a word and Micheal has got his eye closed, all while we are completing a skill check similar to that seen in Battlestar Galactica: The Board Game . The only problem with this as I can see is that it wouldn’t be around too long before everyone the group is bored with its forced maddering fun. Also, you could face some restrictions where and when you can play this. But it is one I want to play at less once or twice.

“Hey Joel, There’s a game called Shark Island! And It is based on the Jaws movie!”
“Where and when can I get it?” I say
But hold on, it too is also a co-op! Am I out of my mind? That is 3 for 3 co-op games on my list so far, I think I need to recheck my list again… Ok, so it’s not going to the last co-op on the list. In Shark Island, you and your friends will have to join forces to hunt down a great white shark to try and kill it or scare it away, before the shark gain enough terror to win the game. The theme sounds great but is another coop that will suffer from the alpha gamer syndrome, we will see.

Hazah! The first none op-op game on my list but you might still need to work together in some sort of way to survive the zombie’s hordes, by flicking them away! Like many people when this first popped on the interweb, I thought it was a joke. Nope, this is real and this could knock the Cowboy version off my shelf.
I want to believe in my head that the designers of Dead of Winter and Flick em Up were sat have a beer together and one of them made the joke “What if Dead of Winter and Flick em Up had a child?” And others just ran with it.
I really like the sound of this version and some of the things I found annoying about flick em up has been worked of this, plus the theme might work better here and you are not in teams now you’re on your own.

This is an old game in the way that it was released on Kickstarter many moons ago and now it has been picked up by another company and getting a reprint. with redone graphics and simplified text and symbols use now. The game looks clean and crisp, I haven’t yet played the first version, so I would pick this up as there have been some good reviews done about it.


And this award for the board game with the longest title goes to this game. And it has been created by British designers Matt and Brett. Again it’s another co-op where players and trying to find historical items that the evil professor has stolen from points in history and the future, your job is to hunt these down in his mansion before the professor makes them disappear for good. What I like is it seems a bit silly and loose around the edges of the concept of what is going on in the game, and why things are happening. I believe the designers know this and use a bit of tongue in cheek humour for the synopsis; “Thankfully the old soul is a bit daft and won’t evaporate you should he catch you lurking through the mansion, but simply scoot you out the front door where he’ll forget about you immediately.”

How about an area control game, warring over organs in a human body, sold. Players are a virus trying to be the best it can be at infecting the human body and gain control of the body’s the organs to score points. Other players will attack you or play cards that will activate the immune system or best still you might cause and crisis in an organ and activating the body’s anti-virus system. If you explain this to other gamers it sounds like any other war game but with its unique setting and quirky art work, it looks like a whole lot of fun then other area control board games.

Two things will make me sit up listen 1) a new dexterity game, 2) it’s by Renegade Studios. and it’s based loosely on Space Invaders! Point me the right direction and there be no stopping me getting to their stand to claim a copy. It is another co-op game where you are defending a futuristic city from invading space ships by flipping a disc off the table or a stand to land on these cards/ships that ascending slow down the table. Followed by the mother of all mother ships, which is a big card board pop out that takes hit by actually flipping your ships inside it. Awesome!

You might mistake this as bastardised version of Jenga, and you’ll be right in some ways; because you will be removing a block of wood from a stack of more blocks of wood and placing it on to or next to the stack. The blocks are different sizes and have colours on it faces, but the challenge here is each player as their own pawn piece, which needs to climb the stack of blocks to be on the top first. It is slightly more complex then I have made it out to be here. But it’s a tactical and strategic 3D chess like game, but also looks good fun and will be a brain melter.

You thought it was tough delivering goods in medieval times or 1600’s, you should try doing it in the time and setting of Mad Max. And Tom Hardy isn’t going to be around to protect you in this game. Based in a post-apocalyptic wasteland, you and your crew are trying to deliver goods, around this lawless land to make money. Anything can happen and you have to keep a watch your rear view mirror the whole time. Using this setting and theme takes an old worn out genre and gives it new life and injecting fun back into the old euro mechanic. Strap yourself in this might get a little rough but it will fun.

This game was brought to my attention by the guys on the Dice Tower, they were raving about it a lot, so I looked it up and thought what a great idea. You are nature, and you are trying to grow trees in this forest and collect the sun light. Clever placement of new saplings might block your opponents tree in future rounds or they might do the same to you. With the high praise it is already receiving, it will be a head turner when we are playing in a pub, deffoernt a game I want to play and have in my collection.

If I was going to GenCon, this would be the one game I would race (pun) straight for, once the doors open. When I saw the first review hit You Tube I knew this would be a game I wanted in my collection. It plays up to 6 players which would be great at my game nights now. It also plays really fast and it is a racing game; which “racing” is one of my biggest catalogues in my collection, with deck building running a close second. I love the idea that you do own a racing car but you are really trying to predict who will be in leading at certain points on the track. It’s a bit like Camel Up crashes into Formula D in a sense, and I can see this hit the table quite a bit with my friends and family even the be regular game that will come out in our game club. I can’t wait for this to hit the shop’s shelves and to start that engines.

So there have my list of games that I would look to pick up from Gen Con and who knows if they will be released before Essen this year. If not, let’s see if there be any changes.

All so, thanks go to Table Top Together Tool which I used to write this list, it is really simple and quick to use and it is always being up dated as it comes from the BoardGameGeek List.