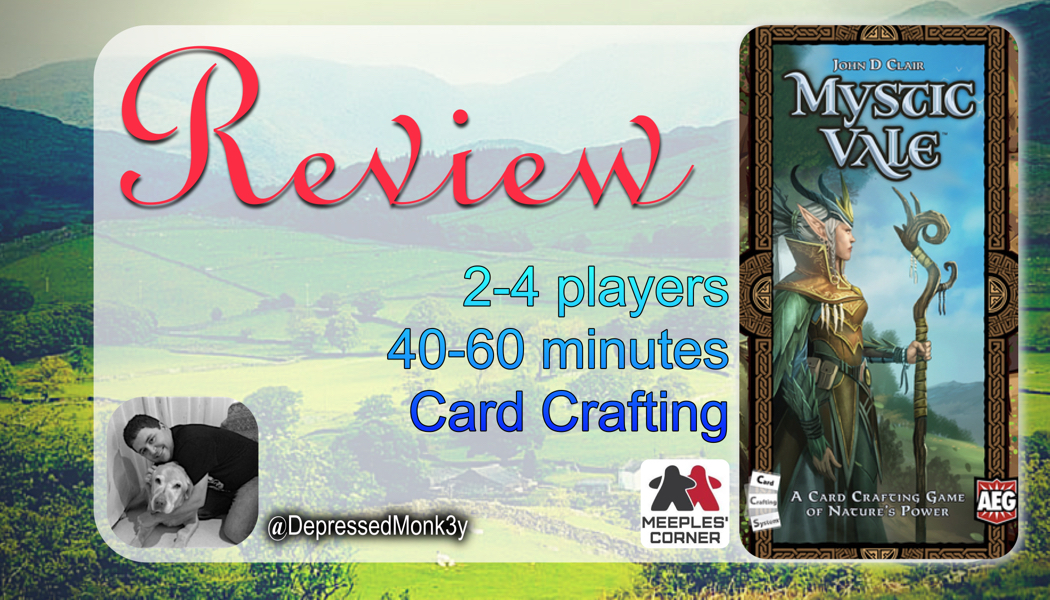 So I have this game, and it has this whole new mechanic thing going on. And for a while, it seems like everyone in the gaming industry has been waiting for this new mechanic.

Ladies and gentleman I give you;     The Card Crafting system. 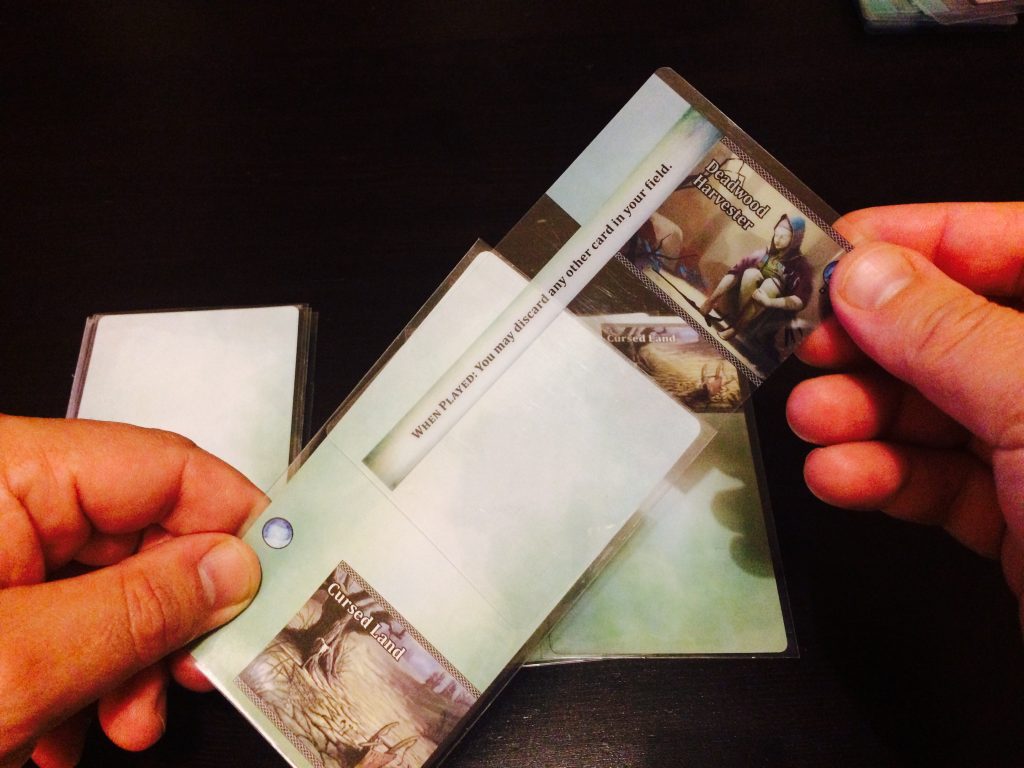 Dominion came out in 2010, which introduced the deck-building mechanic, and spurred a whole plethora of new games using this deck-building concept. And ever since then, we as gamers have been waiting for something different to come out.

Then Mystic Vale shows up with it’s shiny new plastic sleeved cards, shouting, “hey everybody, I’ve got a brand new Game mechanism inside.”

And everyone gathered round to see what the new guy could do.

It looked promising at first. Your starting deck of cards in Mystic Vale have to sleeve with the plastic sleeve provided. And like any starting deck in a deck-builder, they are rubbish and some cards are even blank and do nothing for you. Until you buy improvement upgrade cards.

So, this is a nice little niche idea here, that the game comes with a pack of sleeves and you have to sleeve all the players starting decks before the game can begin. Sleeving cards is also not new, for any anal, OCD, or proud gamer. Protecting cards is an utmost importance when you are in deep in this hobby. But sleeving the Mystic Vales starting player decks is a must. This also allows you to slip the improvements in the sleeves and upgrade your rubbish cards to become better cards for the next time you draw them. It really feels like your cards are improving as well over time.

So these improvements are clear plastic cards with printing on a 3rd of the card. Then when you slip in the new card the stuff behind can be seen through, unless you put an improvement in that covers an existing one. Which is prohibited!

But it isn’t a new concept; a game called “Gloom” came out years ago where you have a family of 5 characters, that started off quite well and you played clear plastic cards over the top of them that would cover and alter part of the original card. Changing their stats or giving them abilities over the course of the game. I always wondered about this plastic card overlay thing, why it wasn’t used again in other games. The other great thing with Gloom is that you are trying to kill off the family in front of you before the others gamers do it to theirs.

OK, I have some issues with Mystic vale. It plays 2-4 players, but it feels very much a solo experience with other people sat at the table playing the same game. You have no real interaction with the players because cards will not effect the other players, only you. The rules tell you to set up your next turn right after your present one, so when it does come back to you all you need to do is choose between do I stick with what card I have to work with or “push” and hope I can squeeze out a bit more.

“What’s Push?” I hear you say. Well its a bit long winded to explain but it’s a “push your luck” mechanic in the game. When your turn begins, you have the choice to get more out of your deck, because you need more mana (currency) to buy something from the available cards in the market or stick. But there is a very good chance you will bust out then your turn ends. You get compensation in the form of a token that flips over and this will give you one more mana to spend on a future turn.

What I found a lot of the time is that people wouldn’t “Push” and take the chance, because there is always, well most of the time, something you can buy. 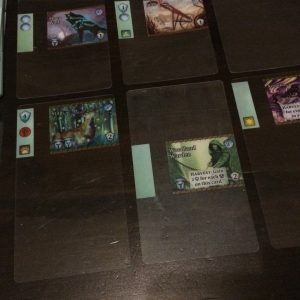 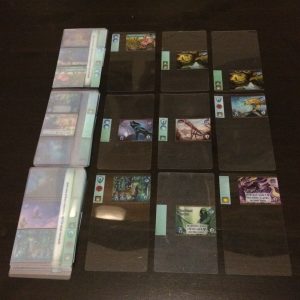 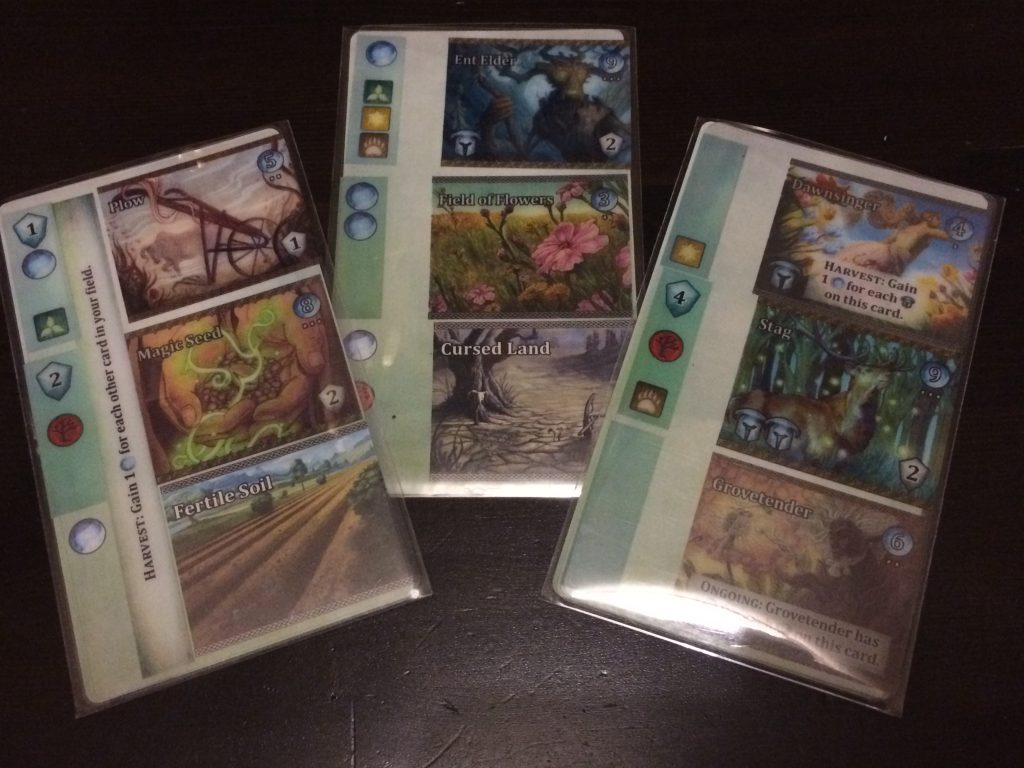 Another issue I have with this game, Luck! The market is made up of 3 decks of improvement cards; light, medium and awesome improvements. The top 3 improvements of each deck are turned face up to be purchased by players. However, it might come round to your turn and there could be rubbish cards for you to buy or you are just short a mana or 2 to get something good. So you buy one inferior card just because you can, and the next card is turned over to fill the gap and would you believe it; it’s awesome! You could have brought it on that turn. But it’s not your turn now, it’s the next players turn and they buy it and the card that replaces that one is… rubbish again. And so your deck of cards is taking an ok-ish shape where your gaming partner’s decks are full of awesomeness and she is turning over card after card and oh… they are buying from the awesome market almost every turn. Where you’ll be lucky to buy from the medium class market without being laughed at.

The Vales; are another set of cards that can be brought using different set symbols that are found on some improvements. If you can get enough symbols showing on your turn you can buy vale cards, they are placed in front of you giving abilities and victory points to you. You can find that the symbols you acquired on improvement cards don’t come around at the right time. And if you don’t spend them on that turn, well, of course, they are wasted. I kind of wished there were tokens you could bank if you didn’t buy a vale card that turn, and you can save them for the next turn.

Another issue I have is the art work on the improvements is great, beautiful but it’s squashed into a 1/3 of the card which looses a bit of its lore. This could also be because it’s printed on plastic making the ink look rather dark. Plus, when you are adding improvements to your starting deck you can see bleed out behind the backs and the card itself gets fatter the more you add to it. So there could be a tendency to semi-cheat, when you might feel the need to push a bit more. Mystic Vale can be a card counters dream, I have seen players draw their whole deck in a turn because they got lucky with buys and crafted their deck to allow them to do so.

Mystic Vale, needed a bit more to it, more options and more symbols. What do I mean by this? When you are playing your turn, you will cover up the last card played, leaving only the lefthand side part of the card. this part will have symbols on like mana, crust lands, vitory points and vale symbols,  but your improvment cards can have guaridian symbols and text that might relate to these or something else. once you play a card on top, you can’t see this other information, so you have to remember the text is there. Plus this will also get you questioned by your opponents about “how you have done all that and not busted”. So I wish there was more more symbols on side of the improvements, that would of been nice little reminder.

So I have been a bit down on Mystic Vale so far, well lets turn this waggon around and I would like to say I do enjoy playing this game.

If you get lucky you can buy awesome cards on your turn and these cards can start turning into an awesomely crafted piece of art, almost like creating a rare card in any collectable card game. You can construct a card that has some or lots of synergy making that one card; the bomb (that’s the expression, not an explosive device)! Every time that card comes round, boom, you are either racking up the points or the game. This can give you great satisfaction in the mean time while your gaming buddies sit back scowling at you. 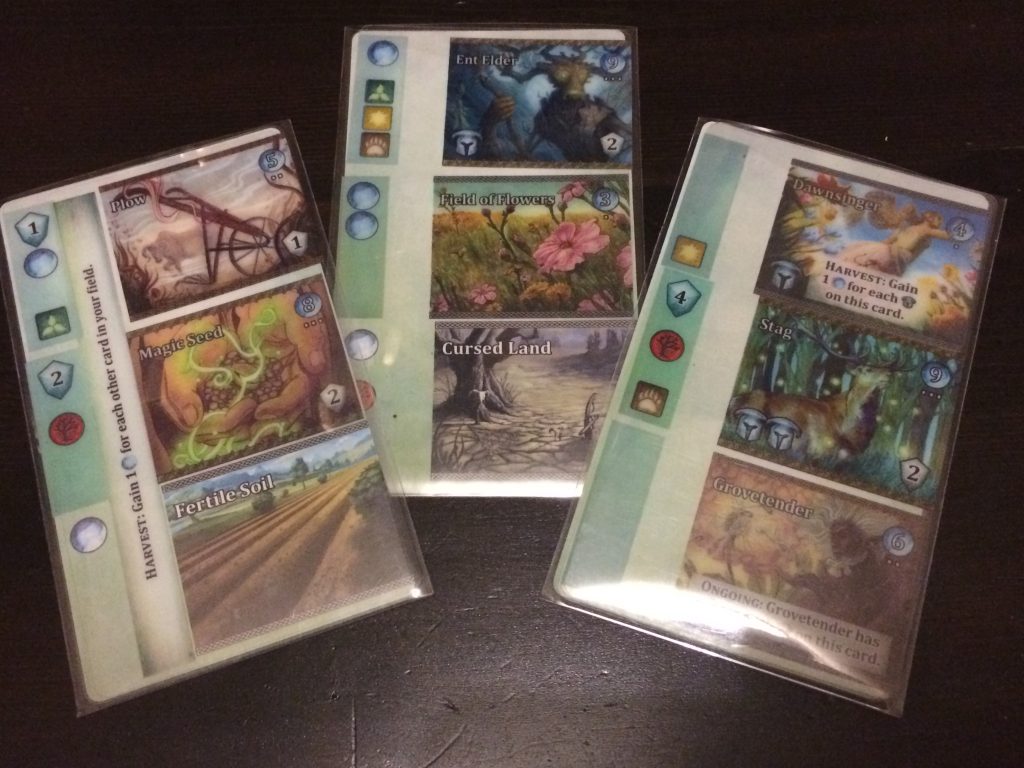 I think what I like about the game most is playing it with the wife. One, I know she is not card counting, she can’t even remember what happened in the last DareDevil episode let alone the 20 cards she has in front of her. But playing the game for what it is, an experiment, trying out the new combo of improvement. It is a new system, and the rules are not complicated at all. The game can stay very simple too. Sometimes, cards combined with vales can get a little out of hand, and while they are umming and erhing over what to buy and how they could improve other cards, you sit there twiddling your thumbs deciding whether to push on your turn or not. Which if it works out then you could buy that good improvement sitting there in the middle of the table, that they are not interested in at all… Oh wait, they just picked up that very same card…

I wonder if this is an experiment, I think that because in the rule book, in the back, is an advert for another game in the system called, Edge of Darkness, but there is no other information about it on the interweb. So… did they make this before or after to put out in the testing ground to see if this is the new mechanic everyone is waiting for?

One thing I do know is there is an expansion for Mystic Vale coming out this month (October). This stinks a little to me, as they (the publisher) seem to have removed part of the original game to have as an expansion for money gain. As I have read, this expansion is just more improvements and vales and adds one small element to the game. But, never the less I will probably get it, in the slim hope, it turns an ok game into a good game. If that happens then I know they have definitely removed part of the game to use in the expansion.

In all, I don’t think it has turned the world upside down with this mechanic of crafting cards. It is a neat idea and I still do play it with the wife, but I don’t see it being played at any groups or even being talked about come to think of it. I believe when this expansion comes out that will be it; no more content for this game. But, maybe we will see this other game they have teased us about in the rulebook next year sometime.

I’m not saying you shouldn’t play this game, you should, give it a play for the experience. You might walk away thinking: yep played it, I’m done with it, or you might sit there and think about what you just did and want to play again because you want to try and construct a different card or cards next time round.

I believe it is an experimental system that’s not gone wrong but needs tinkering with, before it can become the new deck builder of this age.

Mystic Vale Review
Please Share this with your friends 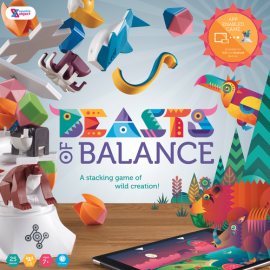 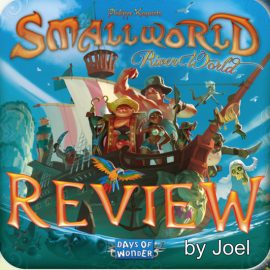