What You have all been waiting For!

The long-awaited next instalment in the Clank! series Expeditions,

Temple of the Ape Lords.

Adventure deep into the jungle where the fabled Temple of the Ape Lords is said to reside. Valuable relics of their lost civilization await you…as does an undying mechanical guardian the Ape Lords left behind. Even when you find the temple, navigating its mechanized passages may prove trickier than you expect!

You can find this title on your friendly local game store shelves beginning in September.

Joel’s thoughts: I’m going to need a bigger box! new maps are great and all but I do wish they would bring out more cards that could fix the problems not being able to trash cards from the original game fix some of the cards.

Maybe the legacy game will do this, when it is release later on this year.

New Clank! Expeditions: Temple of the Ape Lords. Expansion Announced
Please Share this with your friends

Exit The Game: The Pharaoh’s Tomb Review By Joel Wright. No Spoilers 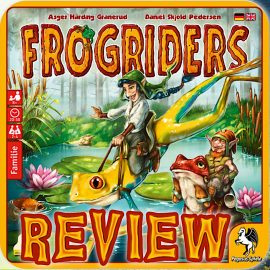 Frogriders Review – By Joel, No Frogs Were Kissed In The Making Of This Review