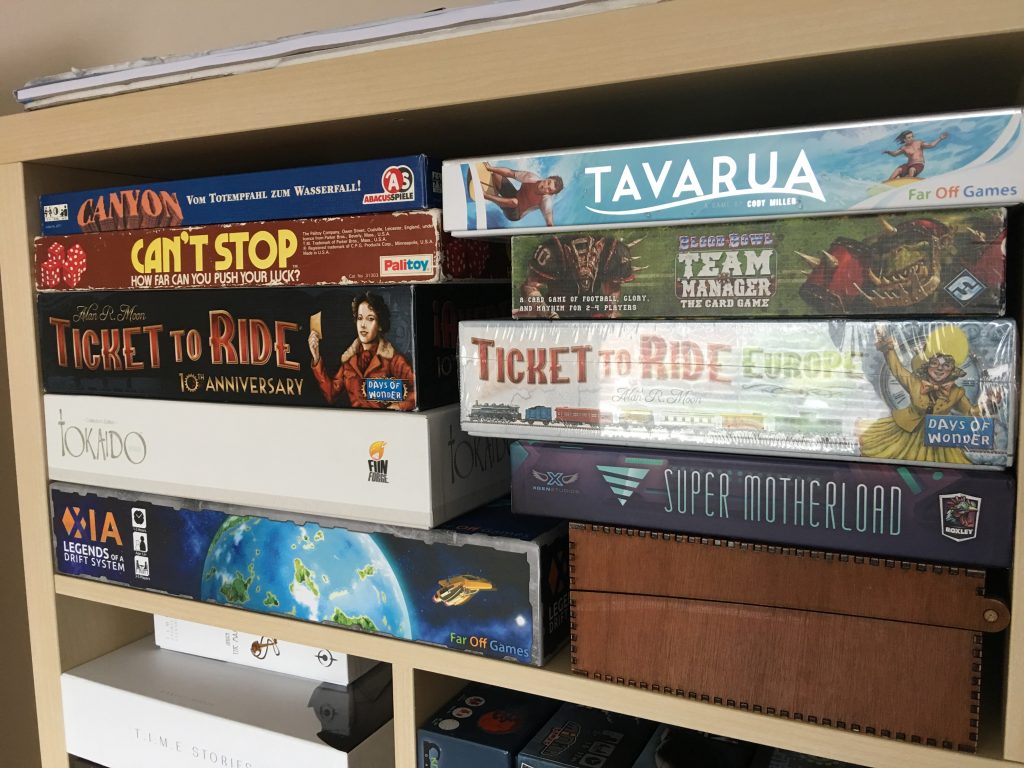 Inspired by others, most notably Tom Vasel’s segments in the Dice Tower’s Board Game Breakfast series, I thought a regular blog series showcasing my own shelves bit by bit might be interesting for some. If nothing else, it will help me consider my whole collection.

Now, bear in mind, these shelves are subject to fluctuations in both organisation and content. However, I’ll start as I mean to go on and hopefully any big changes will happen before I get to those spots.

My shelves are the 5 x 5 grid of Kallax shelves from IKEA which seem to be the shelf of choice in the hobby. This first shelf is actually two quads combined. I removed the divider to make a wider shelf for the more awkward games in my collection which used to have to sit on the top of the unit rather than in the shelving themselves. So, starting top left and working down and across:

A recent acquisition, this one has been on my radar for a couple of years, after one of the guys in our group brought it along to one of our Tuesday gaming nights.

The game is basically contract whist with a board with players ostensibly tribes of native Americans in canoes racing through the titular canyon to get to the village at the end.

This one is popular with me as we play contract whist (we call it knockout whist for some reason) every Christmas as a family so this one will be a hit now that I’ve started introducing hobby games into the mix during the festive period!

This is the old classic from Sid Sackson and needs little introduction. This copy will shortly be retired, as a friend picked up a copy of the 2016 Japanese release, which is a fab looking edition. However, regardless of the version this is a great push-your-luck game which never fails to hit the right spot.

Ticket To Ride needs no introduction either. Back when I started getting into the hobby it was one of the first games I picked up. That copy was retired when my wife bought me the 10th Anniversary edition as a birthday present and this one takes pride of place. Still a fab game, this version, with the little metal tins filled with modeled plastic railcars and the larger cards, is the business.

I ummed and ahhed about backing the Kickstarter a few years ago. I was going to based only on the look – as fans of the show will know, I’m a shallow magpie gamer. After the Kickstarter ended I did pick up a copy of the standard game in a trade and really liked it as a whole. I then found a new member to our Tuesday gaming nights had backed it and hadn’t yet found someone to piggyback his pledge, so I snapped up the opportunity. Boy, was it worth the wait. A great version of the game which was already fabulous anyway. I know many gamers don’t enjoy it, but for me it’s the absolute epitome of Japanese theming in games and will always hold a special place in my collection for that reason.

#5 Xia: Legends of a Drift System

Another giant box game, this one I was unsure about for a long time. I didn’t back the Kickstarter, despite temptation. I had it preordered with Meeples’ Corner, but cancelled before it arrived. However, in 2016 at the UK Games Expo, Christoph hadn’t sold his copy by Sunday of the show and I snapped it up as my ‘payment’ for helping out the stand for the weekend. Since then I’ve played three games of it and really do enjoy it. I may well pick up the expansion when that finally arrives too.

Fans of the show need know introduction – I spoke about it at length in many episodes and it was my number one game for 2016. The unique surfing theme, the push-your-luck elements, the very thematic scoring, the component quality… it’s near enough the perfect game for me and is by far and away the best Kickstarter game I’ve backed to date.

When I picked this up I knew absolutely nothing about Warhammer or Blood Bowl. I knew a friend who did and I knew I could get it played though, so I picked it up on a whim when I spotted it in a shop in my old, old home town of Ottery St Mary (Harry Potter fans may have bells ringing – it’s the inspiration for the name of the Weasleys’ home, Ottery St Catchpole). To this day it’s one of my favourite games and one that routinely gets brought out. I’ve also now got both expansions and as it’s out of print I’m glad I did!

This one I picked up after Christmas after seeing it on sale in House of Fraser of all places. The one downfall of the 10th Anniversary edition of TTR is the fact the expansion boards are too small for the trains in the game, so I needed either a standard copy or one of the other sets with the basic trains, so this was ideal. I’m not a massive fan of the additional rules in Europe, but it’s good to have it available.

Man, I hate that dodgy spelling, but I’m not going to retread that argument. The game is another I missed out on when being Kickstarted – I have a terrible track record of judgement on Kickstarter, to be honest. However, we got to play a friend’s copy one Tuesday and I was instantly enamoured. I love a good deck builder and I love games with a bit of a retro vibe. This one harkens back to Dig Dug/Manic Miner type videogames and the light deckbuilding element makes it a total winner for me.

The game that started it all for me. It has such pride of place I decided to ditch the box and get a glorious wooden collector’s box from Basically Wooden, who did a fine job in designing it. They’ll be at UK Games Expo again this year, should anyone want a closer look at their wares, by the way, and I urge anyone who is in the phase of the hobby where you want to pimp out your games to do so!

The game itself is evergreen for me. I love it and have since added a couple more expansions, just to flesh out the box a bit more. It currently doesn’t have pride of place on the shelf, purely because it just fits there… but eventually it’ll be made a bit more prominent, to show off the lovely etched decal on the lid if nothing else! Here’s a closer look for those interested:

Shelf by Shelf #1
Please Share this with your friends 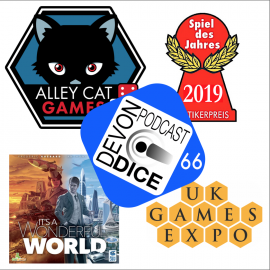 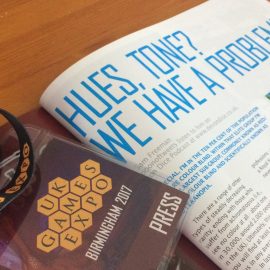 Hues, tone? We have a problem!