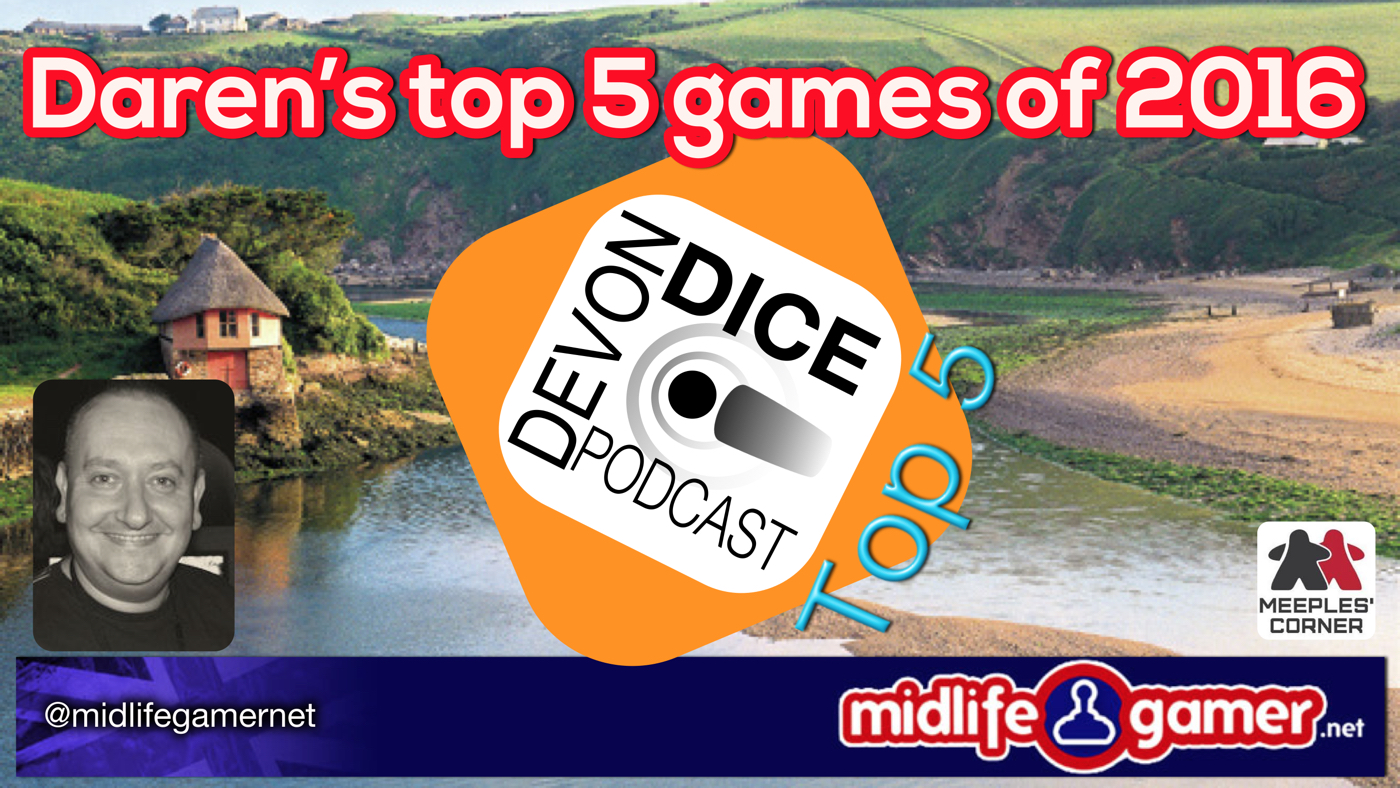 Now, you might be here because of Devon Dice Top 5 games of 2016, you might be because Daren told you take a look at the page, or you might have stumbled here because you are looking at something on the internet that will make you go blind. Well, never mind you’re here now, why don’t you stay and read Daren’s thoughts on his top 5 games he really enjoyed playing last year and maybe will still be playing this year…

If you don’t know the back story; Lewis asked a chap called Daren, who also does his own little Podcast, “Midlife gamers“, to send in his top 5 board games he played in 2016. We asked him to do this because if you don’t know Darren has been an avid video gamer since he could hold a joypad (whatever one of these is). But of late he has been discovering the world of cardboard and dice… and meeples… and cards… lots and lots of cards. And he dived into this whole different world of everything he has enjoyed about playing video games, but now he has to read rules manuals, move all the pieces and calculate everything out himself. Bless him, I remember the easy times, when you just finish a level and sit back and let the computer tell you how rubbish you are at it. Now it takes an age working out the score, arguing with someone that they must have miscalculated your score and you will redo it yourself, only to find out afterwards that they were right and a small wooden token tells you that you are just as crap at this game as well.

These are all Darren words he wrote and sent to us to read out on the podcast, but we didn’t because of time, and I felt guilty not doing so. Then I thought I’d put them here for everyone to read in their own time.

With my gaming history deeply rooted in the ‘digital’ space, I was intrigued at the prospect of playing a board game that mandated use of an app to play. While Descent (hovering just outside of my Top 5) took a great 1 vs many game and introduced an app to facilitate co-op / solo play, MoM has been redesigned from the first edition to fully embrace the marriage of analogue & digital.

After several playthroughs, many of which were repeated scenarios, I’m still impressed at the variability of the game. If app integration is the future of board gaming, I welcome it, and look forward to how far developers can take it.

Star Realms opened my eyes to the concept of deck-building, and in turn blew my mind.

So simple in concept, the easiest game to teach to newcomers, relatively quick to play, and so much bloody fun!

As Star Realms’ successor, Hero Realms puts a classic fantasy spin on the game. White Wizard have taken all the good stuff from Star Realms and makes the game even better. With full adventure campaigns in the works, with missions, XP, and gear upgrades, The ‘Realms’ franchise is set to go from strength to strength, and will continue to feature in my favourites list for some time to come.

As war games go, this is probably the lightest and most accessible to the wider boardgaming audience. But don’t think that the game’s lack of dense rules gives you a lesser experience. While some aspects to movement & combat are elegantly basic, beneath the surface lies a thoroughly enjoyable and strategic gameplay experience.

Scenarios (all historically accurate) can be played in isolation, or can be strung together into a mini campaign as you track the timeline and real life events of the WWII theatre of conflict.

The depth of community created scenarios is astounding, particularly if you invest in some of the expansions.

I will continue to jump at any opportunity to get this to the table.

To preface this one, I bought LOTR LCG a few months back. Played it a few times, but it never took a hold.

Already a fan of other Lovecraft inspired games. I jumped at the opportunity to get in on the ground floor with Fantasy Flight’s latest LCG. And I wasn’t disappointed. All the good things I liked about LOTR were still there, but the gameplay had been refined and tweaked, resulting in a much better and naturally flowing experience.

From the first play I’ve been hooked. Rich theme, deep strategy, tweaking decks with upgrades as you progress, increasing tension as the scenario progresses.

The scope for storytelling is almost limitless in potential, with the ‘Cycle’ and Standalone Scenario’ release models offering both campaigns with a story arc, as well as one-shot adventures. I look forward to falling down the rabbit hole with this one for some time to come.

Took a while to get this to the table after initially purchasing, but after the first play (and succumbing to the weather dice in round 6), I was utterly hooked.

Never have I felt the odds stacked against me as much as this game. Every round brings fresh challenges, which lead to tougher decisions. Every choice you make has to be considered, and there are almost always at least one or two more things needed to be done than the actions available allow. Commit extra resource to guarantee success in gathering food that day so every party member can eat? Of risk a chance of failure so you can focus on strengthening your roof against the oncoming bad weather. Just one of the many dilemmas presented at every step of every round. Strategically there are multiple ways to succeed in defeating a scenario, yet seemingly an infinite number of ways to fail.

An engrossing, unforgiving, but supremely rewarding game that every board gamer should experience at leat once. 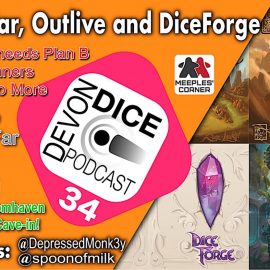 58. DDP Just a Quick one Tonight