It’s a problem every avid hobby gamer likely has to some degree or another. The Shelf of Shame (SoS) is that special place where all the games we’ve bought and never played are kept, whether in practice or just figuratively in our heads.

Since I started getting into the hobby and amassing a collection I’ve had a virtual SoS. At times it was over 20 games strong and has dipped as low as only five or six. The average is somewhere in the middle though and at present my SoS stands at 23 unplayed games. Some I’ve played in the past, but other peoples’ copies or demos at conventions, but these are my copies of games that to this day remain unplayed.

At the start of the year I decided to see if I could rectify this problem. I pledged to play every game in my collection at least once this year and any games that didn’t manage to get played in that time are clearly not ones I’m going to miss and will be duly put up for trade, donated to charity or sold.

We’re now in the second half of 2016 so it’s time for a recap on progress. I’ve played 94 different games so far this year with 57 of those being my own games. That means I have another 64 games to go in order to get 100% on my pledge. The ones I’m most relieved to have played so far include Above and Below, Raiders of the North Sea, Zooloretto, Snow Tails and Robo Rally.

That said… there are some exempt games – ones which are collection pieces and won’t leave my shelves despite not being played. For instance, Carcassonne which is the game that got me into the hobby in the first place and now has pride of place in a gorgeous Basically Wooden wooden box. Or Lost Valley of the Dinosaurs, a game from my childhood with wonky rubber dinosaurs and roll and move dice mechanic – nostalgia factor alone will prevent that from hitting the junk pile.

There are also games which were only added to my collection in recent weeks. I came back from the UK Games Expo with another 13 games, so to some degree these are exempt as well. I need to give them a good 12 months before deciding on them, perhaps.

So, cutting out the new arrivals and the exemptions I’m left with a total of 50 games. That means I’m going to need to work hard to clear my shelf of shame before the end of the year. Even at two games a week I’ll be coming up short and will be facing a sizeable cull in January 2017.

A good number of those games are ones I’ve played previously, just not this year. If we cut them out as well I’m left with a total of 20 games which I’ve bought and never played. That’s a more manageable total and a few of those I have a little buyer’s remorse over anyway. So which of those 20 am I most keen to finally play or most ashamed of still having on that titular shelf?

The Curse of the Black Dice
Picked up at Essen 2015 while picking up Exoplanets from the same publisher, Board & Dice. I’ve taken a look and it just doesn’t seem the type of game that will appeal to my regular group (currently available from our sponsor, Meeples’ Corner, for the much reduced price of £11.97).

Cycling Party
Kind of breaks my rules as it was a BGG trade from the past few weeks. However, this does have a bit of buyer remorse. I love watching the Tour de France each year and this seemed the simpler alternative to Leader 1. The rulebook is virtually incomprehensible though!

Darjeeling
One of those The Works bargains every hobbyist picks up as its cheap and then sticks onto BGG maths trades in bulk. This one sticks around for me though as I’m a bit of a tea nut, so it’s cool to have a tea themed game. I’m going to aim to get this one played before December for sure.

Dexikon
I got this one via the Jack Vasel Memorial Fund auction and it’s still in shrink. To be honest, it seems to be the same game as Paperback, but without as much theme.

Fantasy Frontier
A sale item from Meeples’ Corner a year or so ago, this one appealed after seeing Rahdo’s Runthrough. The theme (steampunk airships), the mechanics (a tile and worker placement hybrid) all seemed to work in its favour, but not managed to play yet.

The Great Fire of London 1666
Another pick up from this year after seeing it dirt cheap online, I’d heard good things predominantly from The Secret Cabal and thought why not. It definitely seems like a good game, just not managed to play it yet.

Joraku
Another of my Essen 2015 pick ups. This one is a Japanese themed trick taking style game with an area control element thrown in for good measure. Zee Garcia loved this one and it got mentions in the end of year podcasts too, so this’ll get played I’m sure.

Mississippi Queen
Another BGG trade where I thinned out chaff I already had to replace with chaff I didn’t. I’m a fan of racing games, as long as they’re not roll and move style ones at least, and this one looks kinda cool. However, Snow Tails may well have replaced it before even trying it, sadly.

Takara Island
This was a gift from Meeples’ Corner as a thank you for helping organise our regular Tuesday gaming nights. Just not had a chance to read the rules yet, must try harder.

Xia: Legends of a Drift System
Another rule breaker, but it kind of works. I have nearly bought it before, preordered and cancelled a couple of times and finally got a copy at the UK Games Expo this year. I’m not going to shift this one on at the end of the year even if I don’t play it, but it’s the biggest (in more ways than one) hitter on this list.

So that’s my Shelf of Shame and the highlights upon it. I’m sure I’ll end up doing a catch up article on this in the next few months to see how well I’m getting on against that 50 game total, but in the meantime why not share the contents of your own shelves of shame? Comment on the BGG Guild, start a conversation on our Facebook page or tweet us @DevonDiceUK with the hashtag #myshelfofshame

The Shelf of Shame
Please Share this with your friends 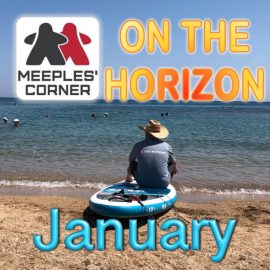 On the Horizon January 2020