Every year, at the end of May, thousands of gamers and geeks descend upon Birmingham for three days of gaming nirvana. From 2007 to 2012 this event was held in a single hotel, Clarendon Suites, in Birmingham proper. In that first year there were just 900 attendees and last year, the first in the NEC, the expo welcomed over 12,000 unique visitors. That number, or more accurately the 25,149 footfall figure, put the UK Games Expo at fourth in the world list of gaming conventions. Now in its eleventh year they’re still growing and looking to make a push on the top three.

In 2016 the show moved from the Hilton Metropole to the NEC proper and what a show it was. Tom Vasel and Sam Healey of The Dice Tower even called it the best show they’d been to, so with the eleventh Expo just around the figurative corner here are some of the things I’m looking forward to over the three and a bit days I’ll be there.

For the past three years I’ve been the dutiful assistant to Christoph of Meeples’ Corner. The first two years we had a small stand in the Hilton trade halls and in 2016 we had an impressive upgrade, with Christoph being enlisted by Pegasus Spiele, one of the largest publishers from Germany, to run their trade stand alongside his own. Last year’s show was an immense success all round and despite having a duty roster for the four assistants, we pretty much all just stayed on the stand the whole show due to sheer numbers of customers and also because it was so much fun! 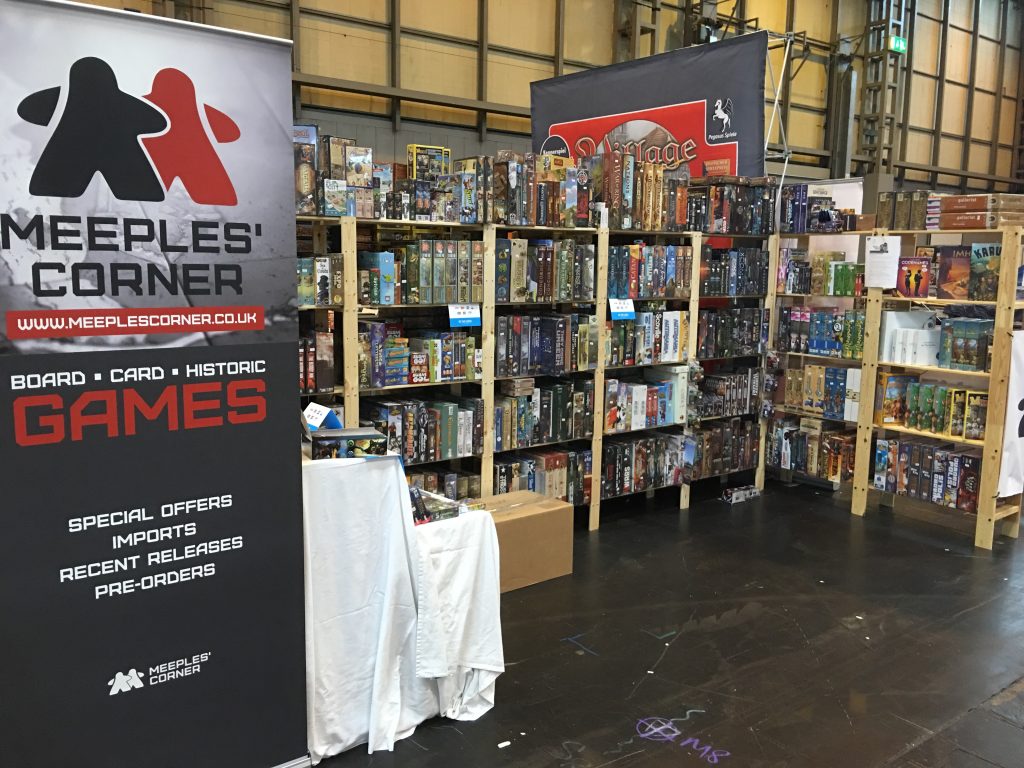 This year promises to be as big, if not bigger, with larger stand footprints for lots of exhibitors due to the expanded hall space and the larger contingent of games being brought over by Pegasus after they dipped their toes in the water with much success last year. I can’t wait to get cracking!

Catching up with friends old and new

The Expo is a great way of meeting new people or catching up with friends. A couple of years ago we had the distinct pleasure of meeting Geraint and Rhyannon of Going Halves on Games, where we played The Adventures of Marco Polo and Rhyannon managed to find me the last copy of Jamaica at the show for a fair price! Last year they were only there for one single day and as we were on the stand the whole time we didn’t get a chance to play anything with them, but this year we’re gonna try and hook up for some game time. Maybe with newly Spiel Des Jahres nominated Raiders of the North Sea, along with Lee who helps out on Pegasus’ stand with us. 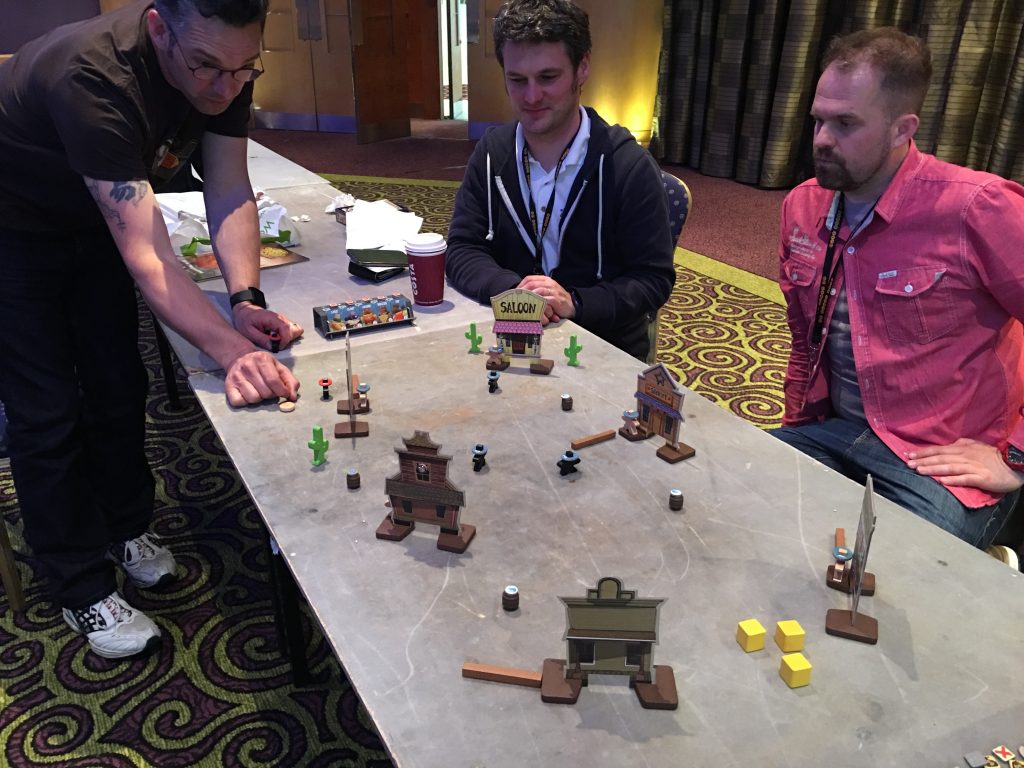 Also, on the Saturday I’ll be hooking up with my very best of friends, Jon (friend of the show) who will be making the trip to the Expo for the first time along with some friends and his son. Assuming Christoph lets me out to play for a couple hours, I’m looking forward to exploring the show and playing some games with them!

Picking up some preorders

In between sessions on the stand I’ll be aiming to get out and about to pick up some preordered stuff from a couple of spots in the trade hall. A couple of weeks ago I put a preorder in with Board & Dice for their new release, Pocket Mars, and a couple of other bits and pieces (Exoplanets poster, Multiuniversum playmat, Brew Crafters Card Game etc). Their 2016 release, Multiuniversum, was a bit of a small pocket sized hit at last year’s Expo and Pocket Mars looks to be picking up where it left off.

Also on my list of pick-ups is The Pioneers Programme from GCT Studios (Stand F1), which was a Kickstarter game from last year featuring art from the incomparable Mico (Raiders of the North Sea, Valeria: Card Kingdoms). It was a cheap enough project to back and I opted for the UK Games Expo pick up. Looking forward to seeing how it turned out.

The Expo isn’t just board games and, up until this year, I’ve not had a lot of interest in any of the additional things on offer, barring some fun accessories. However, for the first time I’m getting into role playing games, being a first time DM for some friends and a D&D campaign. I’m going to devote a little time to looking around for some funky bits and pieces that may help make that experience a little more fun – new dice, towers, notebooks, whatever. My mind is full open!

Another spot on my list is Basically Wooden (A6), who are makers of laser cut wooden accessories like game inserts, game boxes, dice towers and more. I’ve already got a Carcassonne box, Firefly box and a dice tower from them… I’ll have to pop by and see what else they’ve got this year. 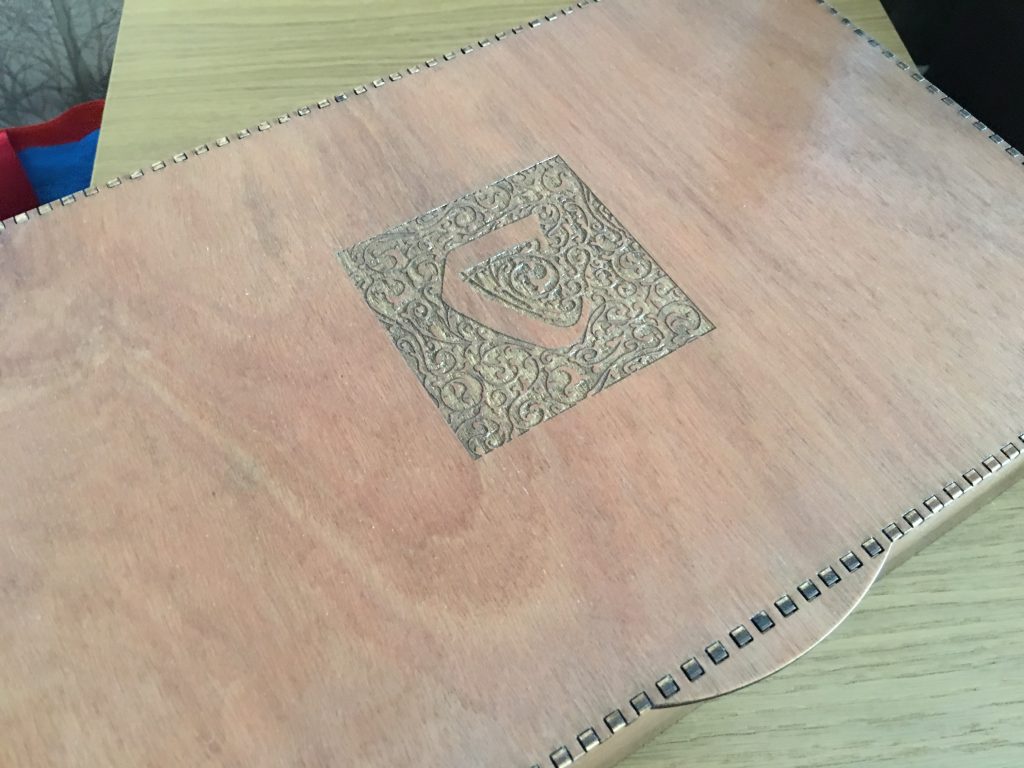 I’d also like to head home with a new gaming related t-shirt. There are normally plenty of geek related t-shirts on show at the expo, but so far nothing that tickles my fancy. I’m hoping the surge in popularity of the hobby will carry with it some of the better ideas for gaming t-shirts.

The one thing missing from the UK Games Expo are hot new releases. That is beginning to change slowly, with publishers and designers now sitting up and taking notice of the popularity of the show. High profile designers like Matt Leacock, Eric Lang, Igancy Trzewiczek and Reiner Knizia can be found wandering the halls and last year The Dice Tower made the pilgrimage for the first time, clearly raising the event’s profile even more.

This year the likes of Mayfair Games, Pegasus Spiele, Days of Wonder, Queen Games, Asmodee, Fantasy Flight Games, Games Workshop and new up and coming UK publisher, Inside The Box, have enormous stands and will be presenting demos of some of their upcoming releases. Surely, it is only a matter of time before one or more of these take the opportunity to use the UK Games Expo as a launch pad for a new title?

Among the notable new releases this year are the aforementioned Pocket Mars, Superhot: The Card Game and Beer Empire from Board & Dice, Century: Spice Road which can be bought at Esdevium, Barenpark from Mayfair Games, Wordsy from Formal Ferret Games and The Cousin’s War from Surprised Stare Games.

Keen gamers will also be able to sample the delights of upcoming games like Alien Artifacts and First Martians from Portal Games, Caverna: Cave vs Cave from Mayfair Games, The Godfather: Corleone’s Empire from Asmodee, Codenames Duet and That’s a Question from CGE, Perfect Crime from the west country’s own Grublin Games, Sub Terra from ITB and many more.

While top new titles may be few and far between from the big publishers, there are a number of hot and promising indie titles available to buy and/or play at the show, such as Nimbee from A-Muse-Ment (F10), Cauldron Master from Alley Cat Games (B1), a raft of new games from Brain Games (C14), Barcelona: The Rose of Fire from Devir (E22) and many many more. Make sure you check out the UK Games Expo 2017 geeklist by Tom Heath for a full accounting before you go to the show!

There will also be some hot new expansions on show, either for demo or purchase, in the form of the likes of Between Two Cities: Capitals from Stonemaier Games, The Networks: Executives from Formal Ferret Games, 51st Stage: Scavengers from Portal Games and Dice City: By Royal Decree from AEG.

So while there may be limited new hotness to pick up, you’ll still be able to get a play of some upcoming goodies.

One of the stand out features of the Expo is the event calendar. Not only are there copious tournaments to enter (Carcassonne, 7 Wonders, Star Wars Armada, Pandemic and many more), there are also heaps of seminars, live podcast recordings and live entertainment events.

I’m not sure how many of these I will manage to catch myself. Last year I booked tickets for The Dark Room and failed to get there, this year I have booked for Knightmare Live and that’s slap bang in the middle of Saturday afternoon, so not sure I’ll get to that one either. But the excitement for them is there all the same!

The Dice Tower are also doing a live show in the main hall and will, I hear, be doing one of their much vaunted live Wits & Wagers events to boot, along with a top 6 (with No Pun Included joining them), Shut Up & Sit Down are doing two shows and plenty more besides. There is literally something for everyone, regardless of interest.

The main reason we are all at the show is games though and the expo proves time and again to be the top dog for game events in the UK. The main trade hall will have an enlarged open gaming area with a games library provided by Thirsty Meeples from Oxford, who have done an exemplary job the past two years. Hall 3 has copious tournaments running, offering up many competitive options for those wanting to test themselves against their peers and the large suites of the Hilton Metropole will be opening their doors once more with space for thousands of gamers. Much like the biggest fair of all, Essen Spiel, you’ll also find pockets of gamers in all the local hotels and invariably they’re a welcoming bunch. Keep an eye open for flag stands on tables to grab yourself an opportunistic game or two.

So there it is. I’ve barely scratched the surface of what the show offers these days. I’ve not mentioned the cosplay parade where you can see the crazy creatives and their insane costumes, the playtest zone where you can sample the hopeful hits of tomorrow, the street food scene where you can satisfy literal hunger rather than just the gaming one and much more. One thing’s for sure, whether you’re a first time visitor or an old hand there’s so much to look forward to and you’re guaranteed to have an utter blast.

Myself and the crew of both Devon Dice (look out for the boys in their red tshirts) and Meeples’ Corner (stand E1) will be delighted to meet you, so make sure you pop by and say hello!

UK Games Expo 2017 Preview
Please Share this with your friends 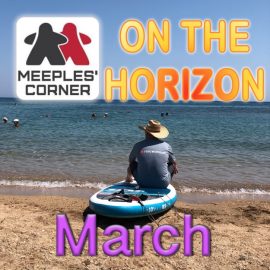 63. DDP Sam i back on A wing and a fireball, Fireball Island and Wingspan 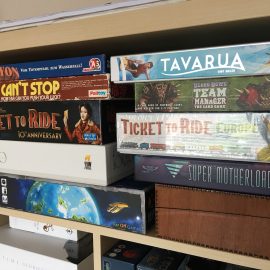