Famed for releasing one ‘big’ game per year, Days Of Wonder may not have the largest back catalogue for a big publisher, but it is packed full of quality. In 2015 they published the Bruno Cathala smash hit, Five Tribes, which took the mancala mechanic and turned it into a fascinating brain burning meeple mover. The same partnership is back this year for a spiritual successor in the form of Yamatai.

Queen Himiko, the warrior queen of ancient Japan, has tasked the players with the job of building her capital city of Yamatai. To do so, players will need to carefully maneuvre the fleets of merchant ships around the islands of the Queen’s lands to build up the structures and recruit notable specialists, converting the islands into the impressive city she desires.

First, a scene setting. The board depicts many islands that make up the Queen’s lands. All bar four islands have culture tokens on them and a handful will be mountainous terrain. Alongside the board are building tiles showing buildings which can be built, specialists along the top (think jinn from Five Tribes) and along the bottom of the board are the fleet tiles.

There are five main phases of play to each turn of Yamatai. The active player completes all five actions (if they choose) before play passes to the next player. The possible actions are:

1. Choose a Fleet: Players start with selecting one of the five visible fleet tiles from the board. These fleet tiles have icons depicting the ship(s) received that turn and also a turn order number which is applied to the following round. Picking a tile, the player immediately receives the ships depicted on the tile and move on to phase 2.

2. Trade: Players have the option of buying or selling one ship. If buying, you pay the cost of the ship and place it in your supply for that turn. If selling, you return the ship to supply and take the money for that ship from the bank.

3a. Place Ships: Players can then optionally play the ships to the board. This is the core part of the game, really. You take the ships in your supply and can play as many as you like to the board, following the placement rules. You can play any coloured ship on one of the entry points on the left of the board or can play on a space next to an existing ship as long as it is the same colour as the ship already there.

3b. Collect Culture or Build: This is the second part of the third phase of play. After playing your ships to the board you can either collect as many culture tokens as ships played from the islands your ships connected to (ie, play two ships and you can take two culture tokens from neighbouring islands).

Alternatively, if the ships played that turn provide the necessary resources (ie, ship colours) that match a building available in the building supply (five face up buildings at the side of the board) you can build. There are standard buildings, which are worth fewer points, but easier to achieve. These also mean you build from your own coloured wooden building supply and hasten the end of the game. Other tiles depict palaces or torii (those cool Japanese gates). If you build one of those they’re worth more points, but you place one of the common supply to the board and not one of your own buildings.

When choosing whether to build or collect tokens you have to choose carefully. You can only build on an empty island, so one that has neither buildings already or culture tokens on them. Taking culture tokens gives you the currency needed to purchase the specialists, but opens islands up for other players to potentially build on.

4. Store remaining ships: Any ships a player has left over after placing them in phase 3 must now store the rest on their player mat. Each player can keep one ship for free from round to round, but any extras are permanently ‘moored’ and will deduct one point per ship at the end of the game.

5. Recruit a Specialist: the final phase allows you to spend your culture tokens to buy a specialist from the board. Two matching tokens or three different tokens will buy you their tile and, just like Five Tribes’ jinns, they grant the player a potentially game changing bonus in some way. They may also have money on them from turn to turn, as any who are left on the board between rounds get two coins added to them, collected by the player when finally purchased. 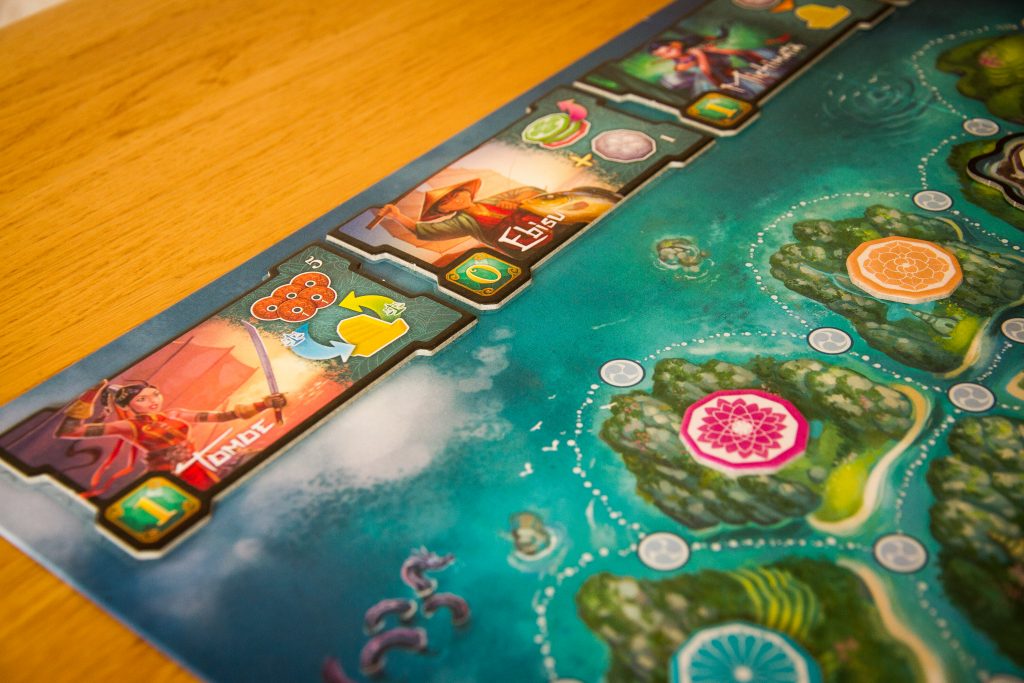 After each player has finished their turn the cleanup phase begins, placing their meeple on the turn order track according to the number on their fleet tile and returning the tile to the board, replenishing buildings and specialists etc. Play continues until either of the building or specialist tile stacks are empty or until a player builds their final standard building. Then scores are totalled up and the winner is the one with the most points.

Overall, while not using the overall mechanics of Five Tribes it does share a lot of similarities and elicits the same type of feelings when playing. Both games feature variable turn order mechanics, a kind of route building with shared resources thing, buildings in place of camels and agonising decisions over what to do, as inevitably whatever you do will give the next player different options, leaving you feeling like there’s always a better move to make, regardless of what you choose to do.

First up, I really like the turn order mechanic, using the fleet tiles to not only give you resources and actions for the current turn, but also defining the turn order for the next round. Do you want the best bonus action? Well, you’re going to be going last in the next round. Or do you take the least special action, but guarantee getting an earlier turn next time? For me, this is my favourite action in the game.

Next is the agonising choice of building something while you can, knowing that if you don’t the next player will probably do it instead, thereby gaining points and/or coins. Or do you take culture tokens, opening up islands for future development, but snagging you one of those specialist tiles and giving yourself a potentially game changing bonus? Then there are the added issues of taking culture tokens from mountainous islands or building in groups or next to royal buildings in order to gain bonuses. All agonising, brain burning decisions to make, but in the same way as Five Tribes this is either the thing you will love or loath.

As with Five Tribes’ jinns, the game changing specialists offer up a multitude of ways to enhancing or breaking rules. There are specialists that allow you to get gold ships by paying with coins or culture tokens, there are specialists that give you bonuses for royal buildings, ones which give you extra money or make money worth more points at the end of the game. A multitude of different bonuses which can make or change your strategy in a moment and add that additional colour and variety to lift the game up a thematic and mechanical notch.

There are a couple of complaints I need to level at the game though. Firstly, due to the slight brain burning feature of looking for that one optimal ‘killer’ move, there is a susceptibilty for some players to lapse into heavy Analysis Paralysis. Some moves have taken players five or more minutes to decide on, leading me to think a sand timer may be a good idea.

Talking of killer features, the theme is ostensibly that of eliminating cultures from islands in order to build upon them. It’s not the intention of the game, clearly, but it does have that feeling of wiping out indigenous populations for your own ends when you stop and think about it, which can be off-putting for some folks.

The biggest fault for me personally though is the colour palette choice. As I’ve talked about in previous podcasts, in some articles and even in the UK Games Expo 2017 magazine this year, some game designs just don’t take into account colour blind players very well. Yamatai features a palette that is almost totally put together to make it impossible to play for me and others colour blind players. Three of the ship colours are red, green and brown. The ships themselves are not TOO bad, but the colours on the building cards and fleet tiles are almost impossible for me to differentiate, meaning I rely entirely on the other players telling me what colours I am looking at and almost always giving away my strategies. In this day and age I find it totally unacceptable that no accommodation is made for colour blind friendly play – the ship cards could have had subtle icons or even different shaped sails or any number of different options. To have made no effort at all is a solid black mark against the graphic design of this game.

Overall though, I have to say I very much enjoy my plays of Yamatai. I have yet to play at three players, but both two and four player games have been a lot of fun. Two player games in particular are very different, with each player receiving two turns per round instead of one. This can lead to you having chained actions where you may go first and second in a round and you’re able to clear islands of culture tokens in readiness for building with your second following action. It makes for a much more tactical game when deciding which fleet tiles to take.

The component quality, other than the colour choices, is typical Days of Wonder and anyone who is already a fan of their presentation will be easily pleased in this case, with a vibrant board, colourful characters for specialists and solid custom wooden pieces.

This is a game which will sit happily alongside Five Tribes for me. It feels linked in some way, playing totally differently yet giving the same kind of vibe. If you were not a fan of Five Tribes you may not dig Yamatai either, for those same reasons mentioned above, but if you’re a fan of Five Tribes then you will almost certainly enjoy Yamatai, for different yet similar reasons.

You can pick up a copy of Yamatai from Days Of Wonder from Meeples’ Corner for £39.95. 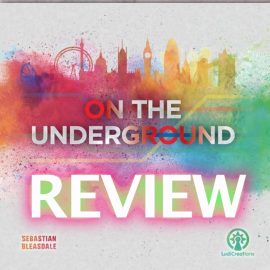 On The Underground Review By Joel Wright 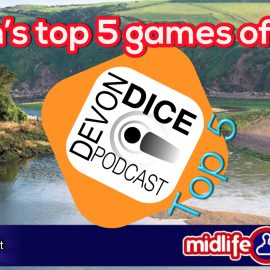